Names in the News: Siri

Siri isn’t exactly new, and it wasn’t developed by Apple. As an app—also called Siri—it’s been available to iPhone, iPad, and iPod Touch users for about 18 months. But the technology has evolved since 2010, when Apple acquired the company that created it: Siri, Inc.

Where did the “Siri” name come from? From the place where the technology was originally engineered: SRI International in San Jose, California. (SRI, you may recall, was originally known as Stanford Research Institute.) “Siri” is simply “SRI” with an additional vowel.

Here’s the original logo, which has now been Apple-fied (see photo, above): 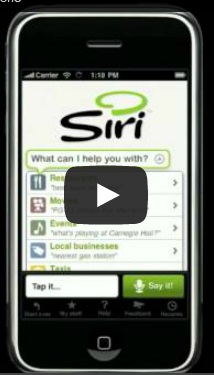 Siri was born in 2003, when DARPA—the Defense Advanced Research Projects Agency, the same agency that invented the Internet—awarded a five-year contract to SRI to create an “enduring personalized cognitive assistant.” DARPA eventually invested $150 million in the project, which was intended for military use. The new Apple version of Siri is decidedly more civilian; it answers, in a robotic female voice, questions such as “Will I need an umbrella today?” and “Are there any good Greek restaurants nearby?” It can access a user’s personal information to arrange meetings, make phone calls, send text messages, and retrieve music.

What’s most notable about the Siri name is that Apple chose not to change it. Siri co-founder Norman Winarksy told Mashable that he was “pleased” by the decision. “In fact,” adds Mashable’s Jennifer Van Grove, “pre-announcement speculation pegged the name to be ‘The Assistant’.” That name would have been much more in keeping with Apple’s bland, near-generic nomenclature—and a whole lot less compelling. “Siri” sounds like it could be a trendy restaurant or a contemporary baby name (compare Suri, the name of Tom Cruise and Katie Holmes’s daughter). Also worth noting: Although Apple uses the neuter pronoun “it” to refer to Siri (“It’s smart enough to know what you mean”), many tech writers have taken to calling it “she.” (See TechCrunch, Mashable, CNN, and ExtremeTech.)

For a little while after last week’s announcement, there was some fuss over the connotations of “Siri” in Japanese. The name “sounds a lot like ‘shiri,’ the Japanese term (尻) for ‘bottom’,” wrote Mark Hachman in PCMag.com. Gizmodo put it more crudely: “Siri Sounds Like Ass in Japan. Literally.”

Not so, according to Rochelle Kopp, managing partner of Japan Intercultural Consulting. Rochelle, who is fluent in Japanese, pointed me to a Tumblr post that debunks the spurious translation:

One word for your seat in Japan is “shiri” (しり in hiragana, 尻 in kanji), which, if you are unfamiliar with Japanese, may look just like Siri. However, while Siri is pronounced ‘SI-ri’ with the accent on the first syllable, shiri is pronounced ‘shi-RI’, with the accent on the second syllable. This may not seem like much of a difference to you, but in Japanese there are dozens of words like that. Besides, Siri has a “s” while shiri has an “sh” sound, which are not the same thing either.

There is one potentially confusing thing about the name: SIRI is the stock-ticker symbol for Sirius XM, the satellite radio company.

See also “My humble personal assistant” in my Word of the Week post about humble.

Posted at 07:17 AM in How They Got That Name, Japanese, Names in the News, Naming, Technology | Permalink

The word 'siri' (சிரி) is a verb in Tamil asking some one to laugh/smile.

Reference for the Tamil meaning: http://dsal.uchicago.edu/cgi-bin/philologic/getobject.pl?c.4:1:6594.tamillex

But Japanese doesn't have the syllable "si", so when Japanese people say it, they will tend nearly always to say "shi", which is permitted in Japanese. This is why the Japanese refer to a certain late Italian-American crooner as "Shinatora".

The difference Ms. Kopp points out *is* enough that the Japanese can distinguish between the two words. But if she really thinks no one will notice the similarity and perhaps get a laugh over it, well, maybe she hasn't spent much time with Japanese high schoolers.
And I find it odd that she points out that "si" and "shi" are not the same sound, because someone fluent in Japanese surely knows that the "si" sound in a foreign word is always rendered "shi" in the Japanese version. If you wanted it to be otherwise you would have to make a specific effort to convince them to transcribe it differently.

Thanks for your comment, AJ. A point of clarification: Rochelle Kopp did not write the Tumblr post that I quote here; she simply sent me the link.

" many tech writers have taken to calling it “she.” (See TechCrunch, Mashable, CNN, and ExtremeTech.)"
Also David Pogue, who loves all things iPhone, in the Times

Siri is a servant in Albert Cossery's novel "The Jokers"

Siri is a common womens first name in Norway.. It is an abbreviated form of Sigrid and means "beautiful victory".. I'm from Norway. And my name is Siri ;)

An excellent and highly informative article; answered all my questions and then some!

My daughter is Thai and her name is Siri. i believe it menas "radiant"