« The Qwikster and the Deadster | Main | Names in the News: Siri »

How Cold Is It?

“Colder than a summer in San Francisco.” 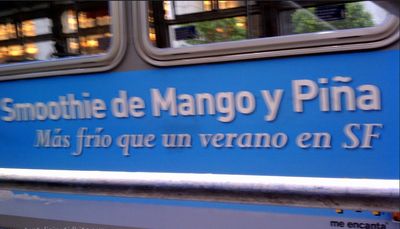 No, Mark Twain never said “The coldest winter I ever spent was a summer in San Francisco,” but that doesn’t mean the statement isn’t true. (The summer of 2011 was especially frigid. Some residents cheered; not I.)

McDonald’s has appropriated the comparison for a local ad campaign directed at the Spanish-speaking market. I spotted one of the ads last weekend on the side of a 47 Van Ness bus, but didn’t have time to take a photo. Flickr to the rescue. Thanks, Shockingly Tasty!

“Me encanta” is the Spanish translation of McDonald’s current slogan (since 2003), “I’m lovin’ it.”

P.S. I also spotted a Chinese version of this ad, but had similarly bad luck taking a photo. Has anyone seen the ad in other cities?

Posted at 08:14 AM in Advertising, Food and Drink, San Francisco, Spanish, Weather | Permalink