Eat, Drink, and Be Spooky

Piedmont Grocery, a neighborhood institution since 1902, gets into the Halloween spirit early and enthusiastically. Here’s some of what I discovered there on a recent visit. 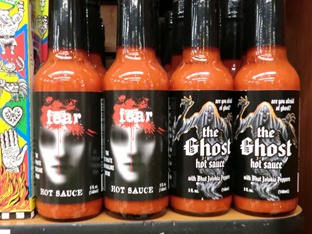 Fear and The Ghost hot sauces are made with Bhut Jolokia, “the ghost pepper of India, officially the hottest in the world.” 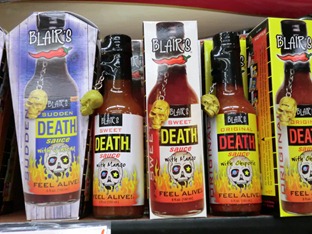 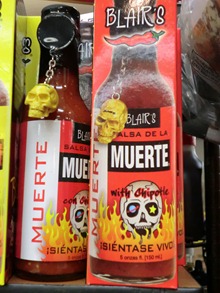 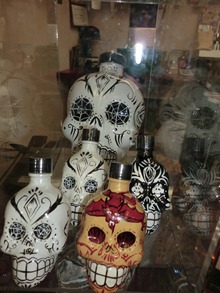 It says here that “kah” means “life” in the Mayan language; the ceramic vessels are “inspired by traditional Calaveras (skulls made from sugar) which are used in Day of the Dead rituals to symbolize death and rebirth.” Click anywhere on the Kah Tequila text for a surprise. 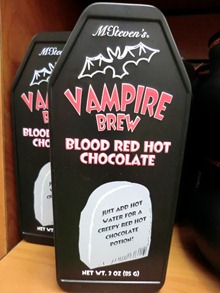 Also on the shelf from McSteven’s: Spider Cider and Skeleton Brew. 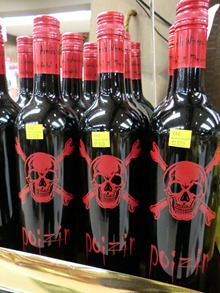 PoiZin Sonoma County zinfandel, “the wine to die for.”

I love the PoiZin name, which is extended on the website: PoiZin Pen, PoiZindex, PoiZin Us. The prose on the back of the bottle is suitably purple:

As she stands in the clearing the cold wind dances through the trees, swirling her golden mane over her diaphanous, silken black gown. The full moon melts into the paleness of her skin. As she stirs the cauldron of Zinfandel she chants an other worldly [sic] incantation. From vials as old as the echoes of time she adds minute pinches of her ancestry. Her slender fingers rub together as the grains fall...

If you can tolerate more of that sort of thing—I chose to quit after “minute pinches of her ancestry”—the full text is here, along with a video about how the bottles are etched.

"Salsa de la Muerte" would probably sell well over here in Tejas del Norte, even without the translation available on the next shelf.