To -er Is Human

You can’t blame Kentucky distillery Maker’s Mark for wanting to pile on the superlatives in an ad for Maker’s 46, the company’s first new bourbon in more than half a century. “Bigger, “bolder,” “spicier”—sure. But “Maker’s-er”? Er … what’s up with that? 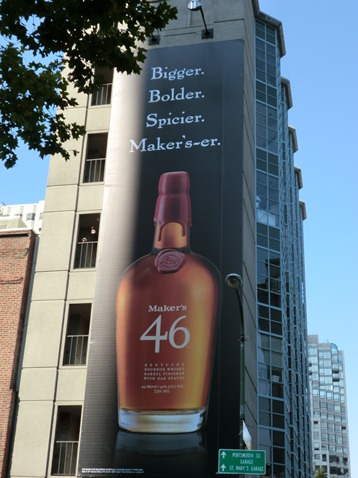 To me, “Maker’s-er” sounds like something you might slur to the bartender on your way to being 46ed—sorry, 86ed—from the saloon. It looks peculiar, too, because of the possessive -’s butting heads, or tails, with the comparative -er. Of course, “peculiar-looking-and-sounding” can be a good thing if it enhances memorability—or even, best of all possible worlds, becomes a meme.

The trouble is, this particular meme isn’t new or original. Like it or not, “Maker’s-er” follows a comparative-and-superlative-coining trend that’s been sputtering along for a few years. Back in 2008, Ben Zimmer wrote a Language Log post about an Android campaign that invented connecteder, smarterer, and funnerer. In July 2010 I wrote about closerer (in an ad for BlackBerry Messenger) and deliciouser (in a campaign for Captain Morgan Lime Bite). And in March of this year Ben Zimmer wrote in the Visual Thesaurus about a TV spot for the laundry detergent Gain that caused a little fuss with its use of gooder. Phrases such as “the decay of our youth” were mobilized.

Oddest of all was Old Spice’s 2010 commercial for “new fresh scents” described as fresh, fresher, freshest, and freshershist. That’s right—not “fresherest” but freshershist. You can now look it up in Urban Dictionary, which means at least a couple of people found it worth preserving. (Not so much the accompanying slogan: “Where Freshness Smells From.”)

But back to Maker’s 46, which has tinkered with the coin-a-comparative formula by appending -er to its own brand name rather than to some other adjective. (Brand names are adjectives, legally speaking.*) The new bourbon has gotten some good reviews (Alcohology: “a body matured like Sophia Loren in her late 30’s”; Drink Spirits: “builds on the excellent foundation of Maker’s Mark and represents a big step forward”); it retails for $35 to $40 for a 750ml bottle. Where, I wondered, did the name come from? The number of years it took to develop the bourbon? No. Alcoholic proof? Nope. (It’s 94, or 47 percent alcohol by volume.) The number of some rural route in Loretto, Kentucky, where Maker’s Mark is located? No again. Here with the answer is an Associated Press story about the brand’s 2010 release:

The product’s name is a tip of the cap to the brand’s barrel maker and one of its top executives, who came up with the unique idea of using seared French oak planks inside the barrel to draw out more flavors. The product’s name reflects the profile number attached to the process.

UPDATE: Thanks to commenter Nate Davis for the link to Clueless in Boston and “Makah’s Maahk.”

* Actually, they’re attributive modifiers. See this 2004 Language Log post by linguist Geoffrey Pullum. The gist: “Attributive modifiers are nearly always optional, so if you have dutifully used your trademarks as attributive modifiers throughout, you should find that when you leave the trademark words out, things still make sense without any change in the grammatical structure of what is said.” Hat tip: Ben Zimmer.

One variation I've heard in blogdom refers to the tendency to pile new laws onto existing laws, ostensibly to plug loopholes; the cry arises, "It was illegal before, and now it's even illegaller."

Come to think of it, how does one plug a loophole? Wouldn't it be easier just to reposition the rope?

@Nick: As I was saying... http://nancyfriedman.typepad.com/away_with_words/2010/07/curiouser-and-curiouser.html

Hi Nancy! Can't say I'm thankful to have that brought to my attention, since you can't un-see something like that. But I suppose such linguistic ignominies are fascinating to we verbophilic types in the sense that car crashes are to commuters.

I will forever have a soft spot for them, however, as someone from Massachusetts, for doing this Boston-appropriate version: http://www.cluelessinboston.com/2009/04/makahs-maahk.html

@Nate: Thanks for that link! I've added it to the post.

There's a qualitative difference between "connecteder" and "smarterer," or "funnerer." I sometimes amuse myself (which is easy for me, exasperating for those around me) by making regular comparatives out of polysyllabic words, so "connecteder" and even "Maker's-er" pass, though the latter looks silly with its apostrophe and hyphen. (But who am I to judge what looks silly?)

But "smarterer," "funnerer," or (god forbid) "freshershist" are just heapings of suffixes. They look like someone has tried to apply German adjective endings to English words.

Yes, "Maker's-er" looks funny, but it makes sense to me in the context, reinforcing the idea that the new product is not a departure but an enhancement of the quality associated with the brand. And I am glad the apostrophe is in the right place; these days, after all, fewer and fewer people seem to know how to use an apostrophe and it is often just discarded.