Every time I drive past this Lexus billboard I do a semantic double-take. 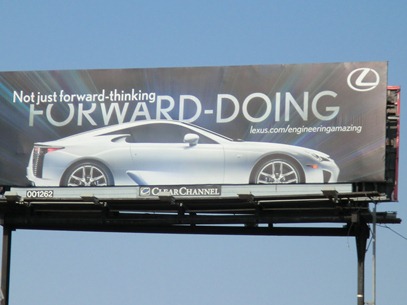 I get the “forward-thinking” part, although “forward-looking” (“ahead of the times”) might sound more natural. And I get the contrast between “thinking” and “doing.” But I’m stuck in low gear on “forward-doing.” How do you “do forward”? Bow deeply from the waist? Make an inappropriately sexual move?

Besides, when you factor in Lexus’s new slogan, “Engineering Amazing,” you’ve got a whole lot of –ing words. On the billboard, “thinking” and “doing” are participles, and “engineering” is—I think—a gerund here. “Amazing” may be a participle (a verb acting as an adjective), in which case “Engineering Amazing” has a Yoda-esque flavor. (“Engineering amazing it is.”) Or it may be some sort of neo-noun, as in “engineering the amazing.” The copy on the Lexus website tends to support the latter theory: “See how Lexus is engineering amazing.” (We’ve seen nouning like that in other slogans: in AT&T’s “Rethink Possible,” for example, or Apple’s classic “Think Different.”)

On second (third?) thought, maybe Lexus’s ad agency just has a tin ear. As evidence, I present last year’s outdoor campaign for the 2011 Lexus IS, “Overqualified,” which featured the names of local thoroughfares. In some parts of the country, billboards had headlines like “Overqualified for the B.Q.E.” and “Overqualified for I-94.” The Bay Area version, however, said something no normal Bay Area resident would say: “Overqualified for the 580.” Yes, Interstate 580 is a local freeway, but only a Southern Californian would put a definite article in front of a freeway number. (Why, I wonder, didn’t Lexus just go for the obvious and say “Overqualified for the Golden Gate Bridge”? Maybe because the GGB has a maximum speed limit of 45 mph; even my Civic Hybrid overqualifies.)

The “the” gaffe made it into the New York Times’s Automobiles section, where reporter Marcia Biederman quoted Oaklander Randy Sloan:

Mr. Sloan went so far as to post an article about the grammatical faux pas on the Facebook page of Match Vineyards, the St. Helena, Calif., business that he co-owns. “Down south, they may drive on ‘the 10,’” he wrote, referring to Southern California, “but we never drive on ‘the 580.’”

Even beyond California, article usage was apparently more of a challenge for Lexus than tuning the car’s suspension.

The company provided a list of slogans used around the country, showing that billboards had mentioned “I-95” in Philadelphia, but “the I-95” near the Lincoln Tunnel in North Bergen, N.J.

But then, who in New Jersey wouldn’t just call it “the Turnpike”?

P.S. If you’re interested in the whole “the” + freeway issue, I recommend a 2008 post by Language Hat, which links to a scholarly article in American Speech, “‘The’ Freeway in Southern California.”

Posted at 08:31 AM in Advertising, Anthimeria, Cars and Motorcycles, Oakland, Slogans and Taglines, They Said WHAT??? | Permalink

I think that "engineering" is a participle and "amazing" is too, though it's acting as an absolute adjective, standing in for something like "amazing [things]". Of course, some linguists say there is no real distinction between present participles and gerunds. Nevertheless, this campaign strikes me as awkward and too clever for its own good.

Forward-doing is a particularly precise type of anticipation, thinking you know exactly what is going to be. That's an even more dangerous pastime than speeding.