Names in the News: Qwikster

Early Monday morning Netflix announced a new service, Qwikster, that will do what the original Netflix did: deliver movies to mailboxes. The entity known as Netflix will limit itself to streaming movies and other content (notably games) to customers’ computers and TV sets.

The bifurcation follows Netflix’s loudly protested repricing of DVD and streaming services, announced in July. In an email and blog post published Sunday night, Netflix co-founder and CEO Reed Hastings issued an apology to customers (or “members,” in Netflix-speak):

I see that given the huge changes we have been recently making, I should have personally given a full justification to our members of why we are separating DVD and streaming, and charging for both. It wouldn’t have changed the price increase, but it would have been the right thing to do.

His explanation of the new name? Terse, to put it generously:

We chose the name Qwikster because it refers to quick delivery. We will keep the name “Netflix” for streaming.

The outcry was immediate and abundant. Mashable speculated whether Qwikster was “the worst product launch since New Coke.” Last time I checked, there were more than 17,000 comments on Hastings’s post. One of the more temperate ones came from Benjamin Hutchins:

The name itself, to me, shows a lack of thought. You say it was to represent the quickness of the service, but to me that was a bad attempt at trying to find an available.com domain when there are so few good ones left. I bet there were lengthy discussions over a good name, probably taking weeks, and yet to me, it truly sounds like a half-witted idea cocked up from someone in front of an investor and needed to keep things rolling.

Here’s my own disclaimer: I have never been a Netflix customer/member. I rarely watch movies at home. So I’m an impartial observer here—except where the name and branding strategy are concerned.

My take on the name: so bad it’s laughable. The branding strategy: mystifying.

Hang on for my explanation. First, though, a little background.

I learned about Qwikster late Sunday night in an email from Benjamin Lukoff to the American Name Society Listerv, to which I subscribe:

Does anyone else think “Qwikster” sounds a bit, well, out of date? Wasn’t -ster’s heyday about a decade ago?

Napster (the music-sharing service founded in 1999) and Friendster (the pre-Facebook social network founded in 2002) come immediately to mind. Both companies stumbled before being reinvented in different formats; both names may have been inspired at least in part by memories of Rob Schneider’s recurring Saturday Night Live character (1988-1994) Richard Laymer (“The Nunster! Nun-o-rama! Nu-u-un!”). Back in 2004, Forbes.com asked:

Are we tired yet of self-styled cool Web sites adding the suffix “ster” to their names? A half-dozen or so ventures, all related to online social networking, have adopted the moniker, apparently assuming that bad boy Napster gave “ster” an allure.

Among the company names on that list: Eurekster, Dogster, and Christianster—all still in business, by the way. (Hat tip once again to Benjamin Lukoff.)

Even after the eclipse of Napster and Friendster, names incorporating the -ster suffix (from an Old English root that originally meant “female agent of”) continued to proliferate. A quick (ha!) survey turned up company names Flixster (“share movies and ratings with your friends”), Buzzster (originally spelled Bzzster; “the best way to e-mail links to videos, news, blog posts, etc to friends really quickly”), Loopster (“we help brands build awesome Facebook fan pages”), Glogster (“poster yourself”), Billster (“organize your personal and shared expenses”; I keep reading it as “Blister”), Jewster (“a better online resource for young single Jewish professionals like you!”), and Recipester (which I want to read as reci-pester; it has nothing to do with cooking but instead provides “software how-to the wiki way”). There’s also bankster, a portmanteau of gangster and banker that was coined during the Great Depression and revived during the financial collapse of 2008.

But Qwikster’s copycat sound isn’t limited to its suffix. Technology blogger Harry McCracken cautioned his readers, tongue firmly in cheek, that Qwikster is not to be confused with Quixtar, Quickstar, Kwikster, Quickster, Kwikstar, Quik-Star, or Kickstar.

All that may be beside the point, McCracken goes on to say:

The folks at Netflix are smart cookies. I suspect that they’re aware that Kwikster [sic!] may get misspelled, has a retro, Web 1.5 sound to it, and just isn’t as clear and appealing as “Netflix.” I even wonder if they intentionally chose a name that’s not all that great because they’re not all that excited about the business they’re saddling it with.

Technology writer Dan Frommer makes a similar point in a post titled “10 Things to Remember About Neflix While Scratching Your Head About Qwikster”:

Eventually, Qwikster may decline enough or pivot into a different business to the point where Netflix may want to fully spin it off. Or sell it, or use it to buy other companies, or merge it with another company, ranging from Redbox to Best Buy to GameStop. Having a nondescript name that doesn’t suggest “mail” or “movies” is probably a good thing, given its unclear future.

Indeed, when you’re dependent on the uncertain future of the U.S. Postal Service, “Qwik” may verge on satire. Which may explain why Netflix has not troubled to file for trademark protection of Qwikster. Nor does it own the Twitter handle Qwikster; that moniker belongs to Jason Castillo, whose tweets run to this sort of thing:

Which brings me to the advice portion of this post. Numero uno: Before you name a company or product, be sure to check Urban Dictionary for pejorative slang meanings.

Numero two-o: Think about how your name might be misconstrued. 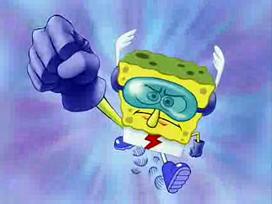 The Quickster, a member of the International JusticeLeague of Superacquaintances (SpongeBob SquarePants).

Quiky, the bunny mascot, made his debut in 1973. Source: Wikipedia.

Please think, too, about how your new name fits into your comprehensive brand nomenclature. Chainsawsuit shows us how:

And perhaps most important, be clear and consistent in how you communicate the name change to your customers. The Oatmeal illustrates: 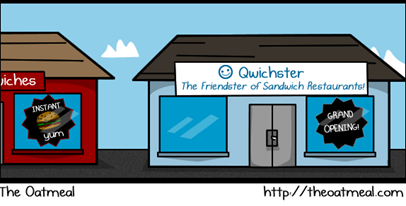 Read the entire strip, a classic. Via this tweet from Dustbury.

UPDATED at 4:28 p.m. to add: Farhad Manjoo, on Slate, attempts to explain the Netflix decision “to split itself in half.” Bottom line: Sometimes it pays not to listen to customers.

UPDATED on October 10: Netflix abandons Qwikster plan. That was qwik.

More on the Q-name trend here, here, and here.

I hadn't known "-ster" was from "an Old English root that originally meant “female agent of”." One of the sketches in Kathy Najimy and Mo Gaffney's "Parallel Lives"

includes a riff on the suffix "-ess:" "I am the lioness! I am the tigress! I am the Teamsters!" It's a wonderful moment; I think it may have originated in a script meeting where one of them suggested "seamstress" and the other either misheard or just punned on Teamsters, and a gag was born.

I envision a drink stirring device from Nestlé.

honestly, my first reaction was something along the lines of failed L2 attempt to use a sexual euphemism. but they didn't ask me (or anyone else, apparently).

What drives me craziest about the choice of Qwikster is that there are so many phonetic variations of the name that it's a candidate for terminal misspelling. That, and it's so boring that it makes Netflix sound snazzy.

Jessica: I misspelled it myself in a LinkedIn Group post. Aarrggh.