Word of the Week: Nymwars

Nymwars: The controversy over Google Plus’s mandatory real-names-only policy. The word, sometimes spelled nym wars—nym is cropped from pseudonym—was coined in late July and gained currency as a Twitter hashtag. 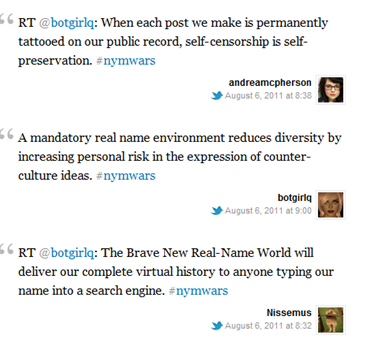 Twitter user botgirlq—full name Botgirl Questi—describes her/him/itself as a resident of Second Life and “a beautiful thought experiment personified through the imagined perspective of a self-aware avatar.” Botgirlq began using the #nymwars hashtag on July 29 as an adjunct to, and eventually a substitute for, #plusgate.

“Real Names Policies Are an Abuse of Power,” reads the headline on a post published August 4 by social media researcher Danah Boyd in her blog, Apophenia:

Everyone’s abuzz with the “nymwars,” mostly in response to Google Plus’ decision to enforce its “real names” policy. At first, Google Plus went on a deleting spree, killing off accounts that violated its policy. When the community reacted with outrage, Google Plus leaders tried to calm the anger by detailing their “new and improved” mechanism to enforce “real names” (without killing off accounts). This only sparked increased discussion about the value of pseudonymity. Dozens of blog posts have popped up with people expressing their support for pseudonymity and explaining their reasons.

Concern about personal safety is the most frequently cited reason to support pseudonymity.

Another site has popped up called “My Name Is Me” where people vocalize their support for pseudonyms. What’s most striking is the list of people who are affected by “real names” policies, including abuse survivors, activists, LGBT people, women, and young people.

This is, of course, serious stuff. But as cartoonist Rob Cottingham discovered, there’s a lighter side to nymwars, too.

Posted at 07:44 AM in Neologisms, Web/Tech, Word of the Week | Permalink