Word of the Week: Hunker

Hunker: To crouch or squat; to sit on one’s heels; to take shelter; to take a defensive posture. Usually in combination with down: “hunker down to avoid the icy wind.” Possibly from Old Norse hokra, to crouch; may be related to haunch (upper hip and thigh). The OED traces hunker to a 1720 Scottish usage; Etymology Online says hunker down is American Southern dialect popularized circa 1965.

There was a lot of hunkering down in the headlines during the days preceding Hurricane Irene’s landfall on the East Coast of the United States. “Quinnipiac University is preparing to hunker down for Hurricane Irene and the aftermath of the storm” read the lede of an August 26 story in The Quad News, the Connecticut college’s student newspaper.  “Find a safe place to hunker down,” Delaware Governor Jack Markell advised residents of his state on August 27.

Peter Sokolowski, a lexicographer at Merriam-Webster, tweeted this on August 28:

And this headline appeared in the Washington Post on August 26: 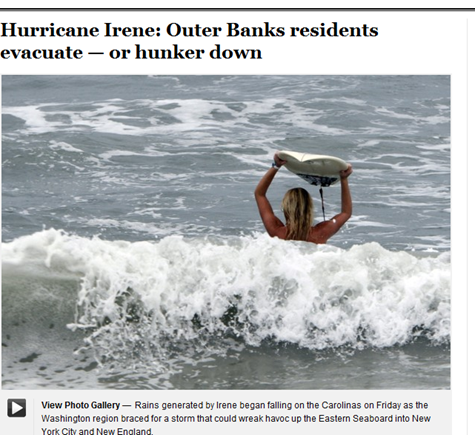 Hunker also has a history as a noun. “Originally, a nickname for a member of the conservative section of the Democratic party in New York; hence, one opposed to progress in general; a fogy” is one definition at Wordnik. The Century Dictionary and Cyclopedia goes into greater detail:

In American politics, a conservative; one who opposes innovation or change; a fogy: first applied in the State of New York as a name to the conservative section of the Democratic party who opposed the Barnburners or radical section, about 1845. Also used adjectively.

Although hunker is no longer used as a nominative political epithet, the sense of “opposes innovation or change” still lingers in some usages. “Holds stubbornly to a position” is another Wordnik definition, with this sentence example: “As the White House hunkered down, G.O.P. congressional unity started crumbling” (Time).

Posted at 06:39 AM in Dictionaries, Etymology, Media, Weather, Word of the Week | Permalink