« Word of the Week: Opsimath | Main | How to Evaluate a Corporate or Product Name »

Whether or not you’re a New Yorker, you’ve probably heard of the Bedford-Stuyvesant neighborhood of Brooklyn. It’s been a center of African-American culture for decades. It’s where director Spike Lee has set many of his films. Many famous folks have called it home: Lena Horne, Norah Jones, Jay-Z, Chris Rock, Tracy Morgan, Mos Def. The neighborhood got its name when the Village of Bedford merged with Stuyvesant Heights, named for Peter Stuyvesant, the last Dutch governor of New York. Bedford-Stuyvesant is often shortened to “Bed-Stuy”; the second syllable rhymes with “sky.”

All of which is background to this name: 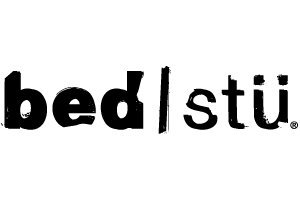 It’s a shoe company that makes footwear with an intentionally scuffed-up look, just like the logo. And yes, the name—odd umlaut and all—is meant to evoke Bedford-Stuyvesant:

Bed|Stu is lean, fast, and tough like the streets that inspired our shoes from day one and as long as we can make our way, we will make shoes and other products for those who have no use for the beaten path.*

The umlaut appears only in the logo. Elsewhere on the website, the name appears variously as BED|STU, bed|stu, Bed|Stu, and Bed Stu. Nordstrom, which carries the brand, spells it Bed Stu. The spelling inconsistencies—ack!—make me wonder whether the name is actually pronounced “Bed Stew” rather than like the neighborhood’s actual nickname.

FYI, there’s no umlaut in “Stuyvesant” (even in Dutch), and an umlaut does not change the pronunciation of /u/ to /aɪ/.

And here’s the kicker: Bed|Stu (to pick one of the spellings at random) isn’t based in Bed-Stuy. It isn’t even in New York. In fact, it isn’t anywhere in the Eastern time zone.

How’s this for incongruity: The company’s headquarters are in Camarillo, a pleasant bedroom community of about 65,000 in Ventura County, California, that was incorporated in 1964. According to 2010 census figures, about 75 percent of Camarillo’s population is white. The major employer in Camarillo is WellPoint, the big health plan; the major attraction is the Premium Outlets mall. Patagonia, the outdoor-clothing company, is about 11 miles away.

So here we have a company in a sunny, mostly white Southern California hamlet with a Spanish name (pronounced ca-ma-REE-yo), one hour north of Los Angeles. The company names itself, kinda-sorta, after a mostly black Brooklyn neighborhood that’s more than a century old. And to add a little spice or ambiguity or urban je ne sais quoi, it plops a couple of röck döts atop a vowel.

Read my posts about the yoga umlaut and the spa umlaut.

* This is a company with an unhealthy affinity for wordiness and dependent clauses: “Fundamentally based in nature…” “With multiple lines to choose from…” “Capitalizing on a love of…” “After converting…” “Boasting a cult following…” And that’s just the About Us page.)

Posted at 09:46 AM in Naming, Punctuation, Shoes, Spelling, They Said WHAT???, Umlaut | Permalink

"And to add a little spice or ambiguity or urban je ne sais quoi, it plops a couple of röck döts atop a vowel."

And sticks in a disappearing, reappearing vertical bar. *shudder*

Spelling inconsistencies - ack indeed. I'm no marketing expert, but just as a writer (and reader) that drives me crazy.