The paint brand Benjamin Moore wants to be on nickname status with consumers, reports Duets Blog. The new informality is reflected not only in the “Ben” name but also in the all-lower-case logos.

Ben interior paint. The logo for exterior paint is in lower-case cursive.

Several brands have jumped on the truncation bandwagon recently: Radio Shack wants to be known as The Shack, Pizza Hut is The Hut, and Campus Crusade for Christ will soon be Cru—to name just a few examples.

Insurance company Unitrin, which was spun off from Teledyne in 1990, will henceforth be known as Kemper Corporation. The renaming represents a revival of a brand that had disappeared in 2002, when Unitrin acquired Kemper Independence Insurance Company.

Before and after logos from Brand New.

If I had to choose a name of the two options, I would certainly go with Kemper. Unitrin sounds like a pill you take when you can’t pee regularly.

It was quite the zcoop—or zcandal—when New Orleans Times-Picayune reporter Doug MacCash broke the story in his blog last month: the “lobster salad” being sold at Zabar’s grocery on New York’s Upper West Side contained no lobster, only crayfish. The kerfuffle eventually made it into the New York Times, which spelled the crustacean “crawfish.” (It’s the same animal whether you use a W or a Y.)

On August 30 the Times’s City Room blog reported a resolution to the controversy: Zabar’s owner Saul Zabar has rebranded the lobsterless salad as “zabster zalad.” 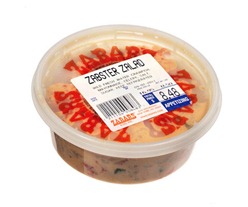 Mr. Zabar had wanted to rename it “seafare salad,” but ran into a trademark snag. Personally, I think zabster zalad is far superior—indeed, it’s a brilliant bit of branding to rival chik’n, wyngz, and cheez.

And while we’re on the subject of food that isn’t quite what it appears to be, meet the snack the world has been waiting for since 1973: Soylent Green. 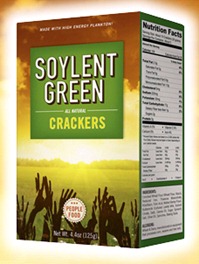 Yes, it’s real ($8.99 a box, US and Canada only), and no, it’s not people. (Because everyone knows corporations are people, silly.) Soylent Green crackers were developed by a San Francisco company, Parallax Corporation*, that brings imaginary products to life. Other Parallax products include Tru Blood beverage (“All blood. No bite”) and Stay Puft caffeinated marshmallows (“They’re apocalycious!”**).

So what’s in Soylent Green? Here’s some product copy from ThinkGeek, a Parallax partner:

Soylent Green Crackers are the food stuff the world has been waiting for. A pleasing green cracker is low in fat and full of spinach, high energy plankton, and a special blend of herbs and people. Wait, what? Did we say people? DID WE SAY PEOPLE? OH SNAP - SOYLENT GREEN IS PEOPLE!! Ok, it's not really people. But Soylent Green Crackers are delicious and a great conversation piece.

* If they’re hiring, I’m available. Just between us, I think Sabor de Soledad could be very, very big.

Posted at 06:50 AM in Food and Drink, Names in the News, Renaming, Spelling | Permalink

I can see the commercial for Ben - excuse me, ben - now: A young couple enters the store, finds the perfect color, and bursts into song. Yes, that song: "Ben, the two of us need look no more/We both found what we were looking for!" So what if the song came from a movie about a rat, right?

I'm glad this version of Soylent Green is not people. But I'm a bit surprised that it contains neither soy beans nor lentils.

Nice post, as usual. I have always been confused about Benjamin Moore paint and Kelly-Moore paint. Were Ben and Kelly the Mondavi brothers of paint, warring siblings who split the family business and went on to be competitors? Or is the name just a coincidence? Neither brand seemed to deal with the name similarity and distinguish itself from the other. The new branding will differentiate Ben from Kelly and that should be a good thing.

Crayfish salad!?!? Being as there isn't enough meat in a crawdad to fill a teaspoon, there must be a hundred man hours of work in peeling enough crawdads to fill a cup. Since they are selling their zabster salad for something less than the price of caviar, it makes me wonder what prison are they getting their crawdad peelers from.