The Headaches of War

Advisory to everyone who hasn’t yet completed today’s New York Times crossword puzzle but intends to: you may want to stop reading this post now.

Trademark forfeited by Bayer under the Treaty of Versailles

“Bayer,” “trademark,” and “forfeit” were all the clues I needed to know the answer: aspirin, a famous case of genericization. What I hadn’t known were the circumstances of the forfeit.

Aspirin was originally compounded in 1853 by a French chemist, Charles Frederic Gerhardt, from salicylic acid, sodium salicylate, and acetyl chloride. The result was acetylsalicylic acid. Gerhardt didn’t market his formula, and it wasn’t until 1899 that a German chemist working for Bayer, Felix Hoffman, rediscovered it. (That’s the official story; a Jewish chemist, Arthur Eichengrün, later claimed that most of the work at Bayer had been his, and that his contributions had been expunged by the Nazi regime.)

Bayer patented the drug and trademarked the Aspirin name, which it synthesized from the a in acetyl chloride, the spir in spiraea ulmaria (the plant source of salicylic acid; common name “meadowsweet”), and -in, a common suffix for commercial medicines. Aspirin was originally sold in powder form; the first tablets came on the market in 1915.

Then came World War I. After Germany’s surrender, the 1919 Treaty of Versailles exacted war reparations that included Bayer’s forfeiture of the aspirin trademark in the United Kingdom, the United States, France, and Russia. (It retained its trademark status in Germany, Mexico, Canada, and 80 other countries.)

Aspirin wasn’t the only trademark that became a generic term in 1919. Bayer also owned the trademark to an opiate drug it had named Heroin. The legal rights to that name were among the spoils of war, and “heroin” has been a lower-case generic ever since. 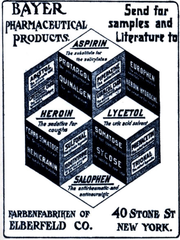 Posted at 08:04 AM in Contests, Puzzles & Games, History, How They Got That Name, Naming, Pharmaceutical, Trademark | Permalink