I Scream, You Scream, We All Scream for Anthimeria

Let’s sing an anthem to anthimeria, the linguistic magic trick by which verbs become nouns, interjections turn into adjectives, and advertisers grab eyeballs.

Here are three current examples from the world of frozen dairy treats. The first two are from Crystal, which calls itself “California’s dairy since 1901.” Originally based in Sacramento, the company was independent until 2001 and is now a subsidiary of Foster Farms Dairy in Modesto. 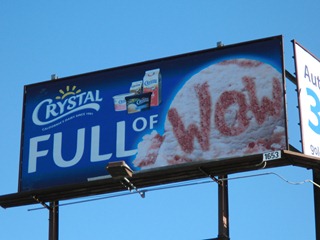 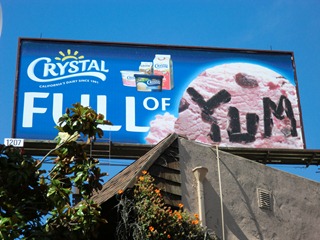 We’re not seeing uses like This team is hungry for win, or Fail is a dish best eaten cold. More typical are the frames full of or made of, or references to boxes, buckets, or bags of whatever the new mass noun is referring to.

Be sure to read the comments on Neal’s post, too. For further study, see Ben Zimmer’s Word Routes August 2009 column, “Fail for the Win!”

Meanwhile, Ben & Jerry’s is truncating “greatness” in an ad slogan. 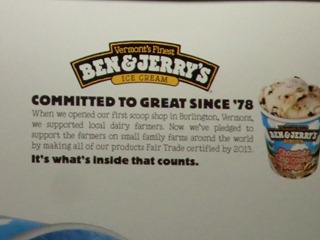 Posted at 06:36 AM in Advertising, Anthimeria, Food and Drink, Signs | Permalink

This is a bit tangential, but "Crystal" strikes me as an odd name for a dairy. It's the sort of word I'd more naturally associate with more transparent fluids than milk....

@Q. Pheevr: Many "Crystal" brands base their names on the concept of "a clear choice." I can't vouch for this company's reasons for picking Crystal--it may have been the name of a daughter, or the name of the grocery store where the first churning operation was located--but "Crystal" doesn't strike me as too much of a stretch here.

Isn't it as in "Crystal Light"? The drink. From powder. Still could be a daughter's name, but the logo looks like the one from the beverage drink. Perhaps the parent company have bought a dairy farm....

Completely agree about the Ben & Jerry's rhyming issue - an advertising compromise in which proper grammar falls by the wayside (as it does so frequently).

Current verb to noun pet peeve: overwhelm. What's with all the "I am in overwhelm"? Or "Don't get stuck in overwhelm!"? Grrrr!

The example that always comes to mind for me is the use of "awesome" as a noun -- e.g., "Your daily dose of awesome" [http://zomg.tumblr.com/]. Have you covered that one before?

This is the kind of thing that I hadn't noticed before but now I'll probably see it everywhere! The bit of this phenomenon that has seeped into my speech is "the stupid". I often use it after driving in particularly hectic rush hour traffic: "The stupid was thick today." It also makes appearances in very crowded stores on the weekend: "I can't take the stupid anymore, let's get out of here!"