Word of the Week: Planking

Planking: The activity of lying face down, arms to the side, “in an unusual or incongruous location” (Wikipedia).

Planking is the name given by Australian practitioners to the “lying-down game,” which originated in North East England in 1997 and took more than a decade to gather momentum. By 2009 it had been tagged by the British media as an “internet craze,” even though the activity is decidedly non-virtual. In September of that year, according to a report in the Sunday Times, seven doctors and nurses in Swindon were suspended from their jobs for playing the game. (Or, more to the point, for being photographed while lying prone “on resuscitation trolleys, ward floors and the building’s helipad.” As others have discovered to their rue, it’s not necessarily the doing that leads to downfall, it’s the documenting.)

The game acquired its shorter, more vivid name when it became popular in Australia in the spring of 2011. A May 11 article in the Sydney Morning Herald reported that the word planking was “so new it doesn’t have its own Wikipedia page.” Richard Litonjua, a Brisbane electrician who started a Facebook page for his fellow plankers, offered several rules, including “Be creative,” “Do it overseas,” and “Be a proper plank” (“'You've got to be a good straight plank, head straight, arms straight, legs down”).

Four days later, another Brisbane man, Acton Beale, became planking’s first known casualty when he plunged to his death from a seventh-story apartment balcony railing. The tragedy prompted Australian Prime Minister Julia Gillard to call for an end to planking.

That, however, did not prevent Sigmar Guðmundsson, host of the Icelandic news-magazine show Kastljós, from delivering a live introduction while planking on his desk on June 10, 2011.

Planking goes by several other names in countries where it’s popular: “à plat ventre” (France), “extreme lying down” (Australasia), “facedowns” (US and Ireland). In Taiwan, where the activity is popular among young women, practitioners call themselves Pujie Girls and use their public performances to promote various causes. According to a Pujie Girls Facebook page, “pujie” literally translates to “falling on the street” in Mandarin. The word is also a pun on the Cantonese curse “Puk Gai”: “may you drop dead.”

Meanwhile, in the United States, the Mad Magazine blog, The Idiotical, last week posted a series of doctored photos headlined “Planking Gone Too Far,” including this one: 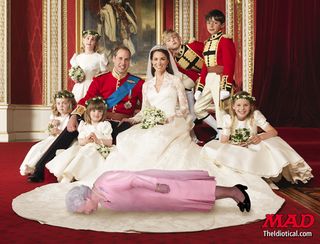 Posted at 06:57 AM in Australian, British, Culture, Slang, Word of the Week | Permalink

I JUST heard this term for the first time last week, when a friend described getting a photo of someone "planking" in front of an Apple store (apparently, this is a popular hobby among Apple employees). I feel so out of the loop. Thanks for the background info!

New silliness, thank you. Growing up in Northern Michigan in the 60s, planking was slang for another favourite horizontal activity.

Planking is the most feared moment of the exercise class I attend, wherein you hold all your muscles rigid for 60 seconds while an instructor yells at you. If you do it right, you pretty much don't need to exercise for the rest of the week. But I don't think I'd plank on a balcony.