I spotted this beautiful wooden bench—harmoniously accessorized by Athos, the shop cat—in Lithia Park Shoes during my recent sojourn in Ashland, Oregon. 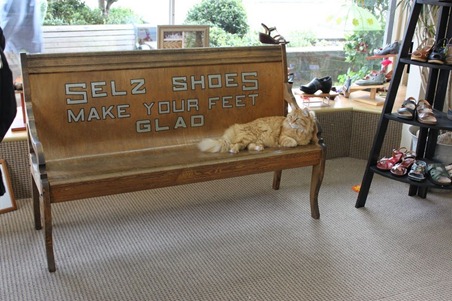 Love that typography. Thanks to RA for the photo.

When I commented on it, the store owner told me that long-defunct Selz Shoes used to give the benches to retailers as promotional items. He added that Selz had at some point been acquired by Cole Haan (which itself was bought by Nike in 1988).

I couldn’t confirm the Selz-Cole Haan connection—all of the sources I found said Selz simply went out of business in 1929, at the beginning of the Great Depression—but I did learn that both companies originated in Chicago. Morris Selz, an immigrant from Germany, founded M. Selz & Co. in 1871; the company became Selz, Schwab, & Co. in 1878, when Charles H. Schwab joined the firm. By the beginning of the 20th century, according to the Encyclopedia of Chicago, the company was making about 12,000 pairs of boots and shoes a day, which made it one of the leading footwear manufacturers in the United States.

The company employed some cheeky advertising tactics, as this replica tin sign (sold on Amazon and elsewhere) demonstrates. 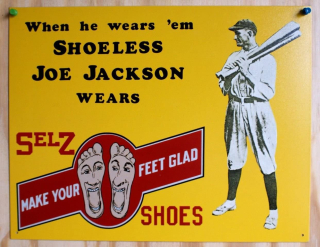 Happy (or chatty?) feet. The ad probably predates 1919, the year of the Black Sox scandal; Shoeless Joe was banned from baseball in 1921 because of his alleged involvement in it. 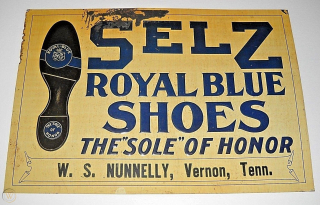 At some point in the company’s history, “Royal Blue” became attached to the brand name. Some ads used “The Sole of ___” as a substitute slogan for “Make Your Feet Glad.”

When your name is Selz, you may feel a magnetic pull toward puns. J. Harry Selz (son of the founder? nephew?) embraced the double meaning when he contributed a chapter to a 1905 book, Selling. His chapter was titled “The Advantages and Importance of System in Selling.”

And Cole Haan? It was founded in Chicago in 1928 by Trafton Cole and Eddie Haan and sold in 1957 to E.E. Taylor, a shoe firm in Maine. In 1975 a former leather-cutter, George Denney, bought the company. Earlier this year Cole Haan announced that it would move its headquarters from Yarmouth to Scarborough, Maine. The company also has offices in New York City, but all of its manufacturing is done outside the United States.

Other posts about old American brands: MJB Why, Gargoyle Coffee, The Friedman Museum of Vintage Products, The 40-Year-Old Quotation Mark. Many posts about shoes here.

Posted at 07:17 AM in Advertising, Naming, Retail, Shoes, Slogans and Taglines | Permalink