Word of the Week: Milliner

Milliner: A person who designs, makes, or sells hats.

Why does a word that means “hatmaker” not contain any suggestion of “hat”? Because when milliner came into English in the mid-15th century it was (sometimes) spelled Milaner and meant “a person from Milan, Italy, who sells fancy wares.” Milan was famous for its bonnets and ribbons, and by the early 17th century milliner had mostly come to mean “a person who makes women’s hats.” In his Dictionary (1755), Samuel Johnson defined milliner as “one who sells ribands, bonnets, caps, &c. for women.”

Both milliner and Milan have been surrounded by doubtful etymologies for centuries. A citation in the OED from 1617 contains a reference to “an Habberdasher … In London also called a Millenier, à Lat: mille, i. a thousand, as one hauing a thousand small wares to sell.” (Milliner has also been spelled mylloner, myllaner, millioner, and several other variations.)

As for Milan (Milano), it was founded around 400 BCE by Celtic tribes that named the city Medhlan: –lan signified an enclosure or demarcated territory. When the Romans conquered the city in 222 BCE, it was called Mediolanum, which “could signify the central town of sanctuary of a particular Celtic tribe.” But a “fanciful” folk etymology (according to the Wikipedia entry) defines Mediolanum as “half-wool.” That story is attributed to a 16th-century Italian writer, Andrea Arciato, who wrote in his Emblematica that “[t]he city’s symbol is a wool-bearing boar, an animal of double form, here with sharp bristles, there with sleek wool.”

Milliner has faded from US usage since the 1960s, when hat-wearing began its decline. (The national headgear is now the baseball cap, which doesn’t require a milliner’s skill.) But last week’s royal wedding in the UK proved that the Important Chapeau still survives—indeed, flourishes—across the pond. The occasion’s most-mentioned milliner was Philip Treacy, the Irish-born, London-based hat designer whose creations adorned 36 heads at the ceremony, including those of Princesses Eugenie (left) and Beatrice, daughters of the Duke and Duchess of York.

In its recap of wedding hattery, Vanity Fair interviewed an expert:

Over the phone, Vivien Sheriff—milliner to the Middletons—explained that there are three classes of headgear. In ascending order of head coverage and/or fabric used, they are: fascinators, headpieces, hats. “There were hardly any fascinators,” Sheriff told VF Daily over the phone. “There were lots of headpieces, and some big, dramatic statement hats.” Sheriff designed the “Bolero” hat worn by Kate’s aunt, Elizabeth Middleton, and the one worn by former V.F. intern Lady Gabriella Windsor. 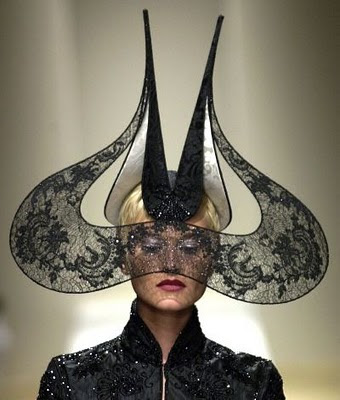 And here are more photos, along with “ten things you should know about Philip Treacy” (#2: “Fashioned his first hats from bits and pieces he picked up at flea markets.”)

No US milliner enjoys the celebrity status of Philip Treacy, but the work of many aspirants to the title will be on display May 7, at the 137th Kentucky Derby. Derby hats tend to emphasize amplitude and flamboyance over finesse, as a Google image gallery attests.

Posted at 07:12 AM in Etymology, Fashion, Word of the Week | Permalink

Will "haberdasher" be addressed, pray tell?
No one does hats like the Brits. I initially recoiled at Beatrice's birdie bow, but it's growing on me.