Word of the Week: Duckface

Duckface: “The face made if you push your lips together in a combination of a pout and a pucker, giving the impression you have larger cheekbones and bigger lips” (Urban Dictionary word of the day, June 9, 2010). 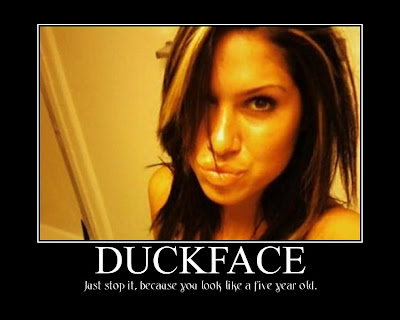 The duckface-photo phenomenon has inspired a backlash, writes Sarah Henry in the New York Times (“Duck Hunting on the Internet,” May 26, 2011):

“Stop doing it. It isn’t sexy,” proclaims the mission statement of the Web site antiduckface.com, whose content consists of photos of people making a duckface, and thousands of disparaging comments. There’s also an anti-duckface Facebook page, with over 16,000 likes, and a Twitter feed, with over 1,500 followers.

Henry antedates the term to the 1990s:

The 1994 film “Four Weddings and a Funeral” has one of the first known mentions of the term. Duckface is the nickname bestowed by Hugh Grant’s Sloane Ranger posse upon his pouting girlfriend.

However, I found a much earlier reference in a review by Dwight Garner of Alfred Kazin’s Journals that also appeared in the Times on May 26. Kazin’s journals, which cover the years 1933 through 1998, are “packed with deft and often acid portraits” of the literary critic’s contemporaries, Garner writes. Including this one: In 1978, Kazin referred to Ruth Bader Ginsburg, the future Supreme Court justice, as “duck face.”

Glad to know there's a name for this. Penny on "The Big Bang Theory" makes this face a lot.