You may already search the Web on an Apple, make a phone call on a BlackBerry, and go shopping with a Plum card. Get ready to refill your fruit basket: Next year you’ll be able to fly on a Peach.

Peach is the name of Japan’s new budget airline, which will begin domestic flights next March from its base at Kansai International Airport. Flights to other Asian destinations are expected to begin in May 2012.

According to a press release, “Peach” was chosen because of the fruit’s association with “youthfulness, energy, generosity, and longevity.” The Japanese word for peach is momo—the name of the well-known Manhattan restaurant group Momofuku means “lucky peach”—but it’s the English word that will appear in all branding materials. The domain is flypeach.com. 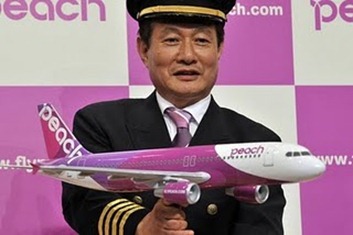 “Peach” may seem like an original choice for an airline brand, but in fact it’s a recycled name. Peach Air was a UK-based charter airline (part of Caledonian Air) that operated in 1997 and 1998. It’s fondly remembered on some aviation forums.

At least one publication mixed up the two Peaches. The online NewTimesWorld yesterday illustrated a story about the new Japanese airline with a photo of the defunct British carrier:

The old Peach, not the new Peach.

I detected another echo of the past—indeed, the British past—in the Peach Aviation press materials. According to Peach CEO Shinichi Inoue, “Our airline will also reflect the smart sophistication that has come to represent the words ‘Cool Japan’.” At least the late, unlamented “Cool Britannia” alluded to something recognizable: “Rule, Britannia.”

UPDATE: Fast Company’s design blog reports that the interiors of Peach aircraft were designed by Neil Denari, “the L.A. starchitect behind the futuristic HL23 tower on the High Line.” The verdict: “It’s an aesthetic that falls somewhere between Virgin's sexy, clubby cabins and a box of Pocky sticks, which was roughly the point.”

Posted at 07:24 AM in Airlines, Branding, Colors, Food and Drink, Japanese, Names in the News, Naming | Permalink

I guess the colour is meant to evoke the flower, rather than the fruit? But to my eye, that bright magenta mostly just screams "discount airline." (In particular, it reminds me of the Hungarian Wizz Air (http://wizzair.com/).)