« Word of the Week: Neurodiversity | Main | Vote for Fritinancy! »

Fear, Loathing, and a Couple of Other Things

Chalk it up to overwork or brain stasis, but when I learned about an iPad/iPhone app named FLUD, I went completely blank. I couldn’t pronounce the name or make sense of it.

The all-capitals spelling means it’s an acronym, right? But what do the letters stand for? At first I thought FLUD was a play on FUD, the popular business acronym for “fear, uncertainty, and doubt.” FUD was, famously, what IBM salespeople instilled in the minds of their potential customers—because, as we know, “No one ever got fired for buying IBM.”

So maybe FLUD stood for “fear, loathing, uncertainty, and doubt”? I wished Hunter S. Thompson were still around so I could ask him.

Then I remembered one of my favorite Gary Larson cartoons. 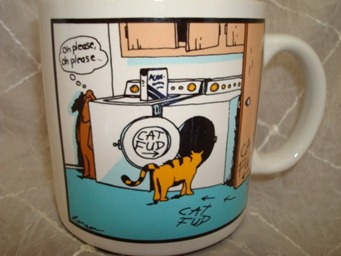 I pondered this for a while and then had a new insight. Could the FLU in FLUD mean “we’re viral and contagious”? But what about the D? Diagnosis? Deadline? Drama?

FLUD is a personalized mobile news ecosystem with a vision to empower its users to interact with each other to access, engage and broadcast content that is relevant to them.**

The company, which is based on San Diego, uses words like “sexiness,” “awesomeness,” and  “robust” on its website. “FLUD” suggested none of those things to me.

I finally got my light-bulb moment about 55 seconds into a relentlessly perky local-news clip on the FLUD homepage. I’ll cut to the Big Reveal:

The name is pronounced flood—as in “a flood of news,” I suppose.

Just one reader’s opinion, but a “flood” of news sounds like the problem, not the solution. And “FLUD” looks like one of those Awesomely Bad Military Acronyms that Wired.com is fond of mocking.

* Gary Larson (The Far Side) has never authorized the online publication of his cartoons, so what you see here is a photo of a Far Side mug that was sold on Etsy. Here’s a view of the original cartoon panel.

** In this “news ecosystem,” it appears that copyeditors are an endangered species.

Posted at 10:15 AM in Acronyms, Naming | Permalink

I'm no naming expert, but while flood might have some positive—or at least powerful—connotations, FLUD just looks like a blend of flub and dud.

Thank you! I love this post. Starts off with an enigmatic name;moves on to Hunter S. Thompson;then to a Gary Larson cartoon;the use of the word "awesome" (which I understand in print,but could never use myself and prefer not to hear)and finishes with a word ,"flud" that descibes my recent work,thanks to Jonathon!