Retail is a tough business. Small, local retail is even tougher. You want to stand out from your competition, but you don’t want to appear standoffish. Most of all, you want to build your word-of-mouth reputation.

Which is hard to do when your customers can’t pronounce your name.

The name of a store in Berkeley, California, illustrates this problem. 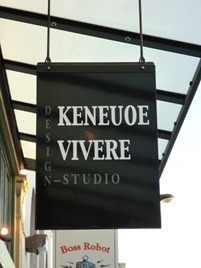 Keneuoe Vivere, which sells women’s clothing and accessories on College Avenue, is a stunning store and the closest thing to a unique retail concept that I’ve seen in the Bay Area. Customers choose from three levels of customization: off the rack (ready-to-wear), fitted (ready-to-wear with tailoring), or made-to-measure from your choice of fabric. All clothing is made in Berkeley. In the ready-to-wear clothing I saw, fabrics were exquisite and styles were beautifully constructed. Ready-to-wear prices are at the high end of moderate—higher than, say, Ann Taylor, but lower than Max Mara. The dress pictured below, from the Spring/Summer 2011 collection, costs $479.

Now, this is an interesting concept that could appeal to women who are frustrated by mass merchandising and can afford tailoring. It's also a concept that requires some explaining to contemporary shoppers. But as difficult as the concept is to understand, it’s easy compared to the name, which trips me up every time I try to say it.

In a bit, I’ll share the pronunciation of “Keneuoe Vivere” with you. (Don’t look for clues on the website; there aren’t any.) Right now, just know that “Keneuoe” is the single name the designer and business owner answers to. I haven’t found any explanation for “Vivere,” which is Italian for “to live” but who knows? It may mean something else entirely here.

To summarize: unusual retail concept with a hard-to-pronounce name. To me that says: This is going to be difficult.

So how do you pronounce Keneuoe Vivere? Well, the first word turns out to be pronounced “canoe way,” according to an article on SFGate. Is Vivere pronounced “vee-VARE-eh”? A mystery.

I understand Keneuoe’s desire to use her own name as her brand, and in general I have no problem with this store-naming strategy. In this case, though, I’d have vetoed the choice. Too many vowels, too odd, too damn difficult.

What would I have recommended? “Canoe” might have been an interesting alternative: it plays on “Keneuoe” while walking a nice line between clear and mysterious, as befits a high-end boutique. And it suggests ease rather than difficulty: imagine a pleasure craft floating effortlessly down a gentle stream.

Retail success is hard. Why make the challenge even harder with a difficult-to-pronounce business name?

Perhaps she thinks it's a sorting mechanism, that the unusual name will detract less desirable clients? Who knows? It looks pretentious and intimidating and I love your idea of calling it Canoe. Canoe would be a playful way of inviting people in, while still being unusual and referencing her name. Oh well. If only we ran the world. :-)

And I thought "Goetsch" was difficult! There's a reason I do business under fictitious names.

@Sallie: And you always provide a helpful pronunciation mnemonic ("rhymes with sketch")!

For that matter, "Canoe Way" sounds like a philosophy one might adopt: no motors to make noise and fumes, no sails to blow you off course - just you and the water, and an oar when you need it.

@Jill: Pretentious is what I get from this. Indeed, Canoe Way would be great, particularly from a trademark perspective.

But this name makes me think of the Hebrew maxim that translates as "those who understand (i.e., who are in the know) will understand." It is not, however, a maxim for retail sales success.

Somewhat related, there's an eyewear place one Shattuck (across the street from the French Hotel) whose store name is displayed in letters set an inch or two out from the wall, and which is all but unreadable from an angle when there are shadows. Doesn't evoke "good visibility" to me.

@Ross: I believe you're referring to De Visu, another name with pronunciation and pretension problems.

The Italian part is easier . " Vivere" VEE ver a (long a). Here's a link where a native Italian speaker pronounces it:
http://www.wordreference.com/iten/vivere

But difficulty can work both ways, can't it? If what you are selling is truly excellent and desirable, customers will pride themselves on knowing how to pronounce your name; this puts them in a special class and lets them show off to their friends. And before long, there's an "in crowd" who knows that it's pronounced "canoe way" and not "kenny woe" (or "goochie" and not "gucky"). But it's a huge risk, though, because first you have to get the customers.