"Comfortable in Its Own Skin"

Here’s half of a two-page ad for the Buick Regal Turbo, which I spotted in the New Yorker last month. I stared at the headline for several minutes. 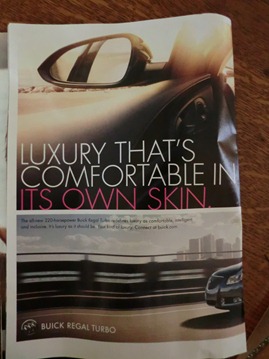 “Luxury that’s comfortable in its own skin.”

Now, I’ve seen and heard “comfortable in my/your/his/her own skin” plenty of times. (The idiom was imported and translated from the French “bien dans sa peau” and may owe its current popularity to the 2005 best-seller French Women Don’t Get Fat, in which author Mireille Guiliano used bien dans sa peau to express “the weight at which I can say, ‘I feel good and I look good.’”) I think every single episode of What Not to Wear—disclosure: I’m an addict—has included someone marveling aloud at how, thanks to new clothes, hairstyle, and makeup, the makeoveree is “comfortable in my/her own skin.”

Not only that: I’d recently heard the phrase in another ad campaign. In March, Dove Men+Care* (owned by Unilever) introduced “Journey to Comfort,” a series of awww-inspiring commercials in which male athletes talk about their families and their feelings. Each ad concludes with the athlete saying “I’m [his name here], and I’m definitely comfortable in my own skin.” (Watch the ads here.)

But I’m pretty sure the Buick ad was my first encounter with “comfortable in its own skin.” And frankly, it made me uncomfortable. For the rest of the day I asked myself questions like: Does luxury have skin? Do cars have skin? How does luxury get comfortable? Why am I spending time worrying about this?

Well, clearly I had just not gotten the memo. It turns out that automotive writers have been using “comfortable in its own skin” to talk about cars since at least 2008, according to as much Googling as I could tolerate before I backed away from the computer and said, “OK, OK! I get it!”

The Cadillac CTS has the most unique interior and exterior styling of this group. The CTS is a car that is comfortable in its own skin.

Here’s Dan Neil, the only automotive writer ever to win a Pulitzer Prize, writing in the Los Angeles Times in February 2009 about the “smaller, leaner, less formal” Rolls-Royce 200EX concept car:

Now Rolls-Royce seems to be getting more comfortable in its own skin: The grilles are smaller (as a percentage of frontal area) and more streamlined and contemporary.

The Toyota Sienna is a good all-around minivan that does what you need it to do without a lot of fancy gadgets and add-ons. If it were a person, you’d say it felt comfortable in its own skin.

If you say so, Bill!

On the other hand, Mike Solowiow of The Truth About Cars found the 2009 Bentley Continental GTC wanting, skin-comfort-wise:

The Bentley Continental GTC wants to be Rolls Royce when it grows up. Or rip off all its clothes and be an Audi A8. Either way, the Bentley drop-top just isn’t comfortable in its own skin, leaving the discerning, non-status seeking driver wondering well, what IS the point?

And in a June 2010 review, the New York Times’s Lawrence Ulrich was dismissive of the skin-comfort of Japanese luxury models:

[A]mong Japanese luxury brands — Nissan’s Infiniti, Honda’s Acura and Toyota’s Lexus — only Lexus has managed to stake out a clear position in the public’s mind. Lexus has done that by being comfortable in its own skin; by consistently fielding cars that, though often anathema to driving enthusiasts, affirm a no-less-worthy set of luxury values: richness, smooth sanctuary and impressive reliability.

A car columnist who can casually toss “anathema” into a critique is clearly someone who knows from bien dans sa peau.

Lest you think only luxury cars are capable of being bien dans sa peau, behold:

The copy on the AutoFiends blog reads:

That’s a Renault 4 and if you’ve ever seen a car more comfortable in its own skin, I’d like to see it. All that’s missing is the leather soft top. Sigh… Gimme!

Conclusion: Car guys have long anthropomorphized vehicles (“she’s a beauty”; “lots of muscle under the hood”). Apparently it’s a very small logical leap to regard cars as not just providing comfort to their occupants but experiencing comfort themselves.

If you have a different theory, I’d love to hear it.

* “Men+Care” is how Dove spells it, and yes, I think it’s odd—especially because  the plus sign is pronounced “and,” and “men and” sounds a lot like “Mennen,” a men’s-personal-care brand owned by Colgate-Palmolive.

Posted at 07:01 AM in Advertising, Beauty, Cars and Motorcycles, French, Idioms | Permalink

If you REALLY want an example of creepy anthropomorphism in car marketing, the worst has to be the 2006 Jaguar model which was touted as being inspired by Kate Winslet's body. Projection much?

Ralph Gilles, Senior VP of Design at Chrysler Group and head of the Dodge brand, has said that the Viper sports car will be revived for model year 2013, and that it was inspired by "a naked woman on the beach." He didn't specify which woman or which beach.

It seems to me that the expression "comfortable in one's own skin" has been long established in its figurative meaning (i.e. not necessarily concerned with the body itself) to mean "self-confidently graceful in manner". So it doesn't seem a stretch to me, or to be unusually anthropomorphic, to apply this to a car with excellent performance. What I find more troubling (though not unexpected) about the ad is that this phrase is applied not to a car but to a concept, "luxury": there seems to be a note of defensiveness in the ad, as if it were saying that people who enjoy luxury (i.e. spending an excessive amount of money for a little extra comfort and a lot of extra ego-stroking) should not be embarrassed by this. But of course they probably should be.

I'm so glad you posted this. I was looking for examples of ads that could be improved (via emotional appeal, tension/release, imagery) and this was the first ad I opened up to in the 7/25/11 issue of Time. The headline is really lacking, and doesn't play well with the images. Just looks like another car print ad that would make me immediately flip the page, if I wasn't studying ads today at work.