« Guest Post at Manolos Shoe Blog: They Named That Shoe WHAT?!? | Main | Objection! »

Word of the Week: Doc-Buster

Doc-Buster: A documentary film that becomes an unusually successful hit. A blend of documentary and blockbuster; apparently coined by filmmaker Morgan Spurlock in tongue-in-cheek reference to his new release, Pom Wonderful Presents: The Greatest Movie Ever Sold. 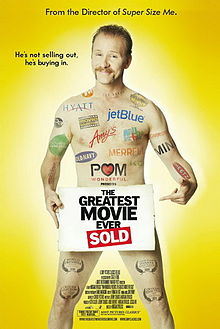 Spurlock, whose 2004 documentary, Super Size Me, was nominated for an Oscar, told a reporter from the CBS business channel BNET:

My producer and I were talking about all these blockbusters like Iron Man that had these product placements. And we wondered if a documentary that had those same partnerships and co-promotion could be a blockbuster?  Could we have a ‘doc-buster’?

[Spurlock’s] idea for a “doc-buster” supported by corporate sponsors, he says, was a tough sell. Telephone calls to several hundred companies are met with indifference and sometimes suspicion, which is not surprising because “Super Size Me,” for all its humor, attacked McDonald’s.

Blockbuster has an interesting and diverse history. It was coined by the US military around 1942 to describe a high-explosive bomb capable of destroying (“busting”) a city block. (The OED calls the verb bust an Americanism for “burst”; however, Dickens used it in that sense in Nicholas Nickleby and Martin Chuzzlewit.)

In the 1950s, blockbuster acquired two figurative meanings: the entertainment meaning (1957) and a racial/economic meaning (1959). The entertainment sense gave rise to the name of movie-rental chain Blockbuster, which was founded in 1985, filed for bankruptcy in 2010, and was sold at auction to Dish Network earlier this month.

The racial/economic sense is illustrated in this 1967 citation from the British weekly The Spectator:

The ‘block-buster’ is a figure in American urban life who has yet to emerge in this country. He is a property dealer who by subterfuge introduces black residents into all-white neighbourhoods.

Documentary has lent itself to a few blends, notably docudrama (a movie or TV program based on fact). Besides doc-buster, I found two other humorous coinages based on blockbuster: mock-buster (“a low-budget movie with a title and plot similar to a current blockbuster film”) and bonk-buster (“a bestselling novel that features numerous sex scenes”). (Both citations from Word Spy.) For more on bonk, see Mary Roach’s nonfiction book with that title.

Posted at 07:12 AM in Advertising, Film, Marketing, Neologisms, Portmanteaus, Word of the Week | Permalink

Fascinating about the double meaning of "blockbuster." I'd never heard it used in the urban/racial context.