I snapped this sign in my neighborhood last month: 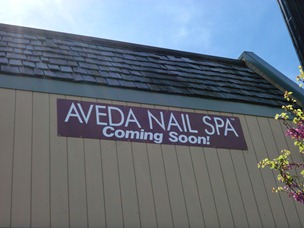 It looked like good news. Although there are already 73* nail salons on the local commercial stretch, not one of them is a flagship for a major beauty brand like Aveda.

True, Aveda isn’t major major like Olay or Lancôme; Cosmetics Business doesn’t rank it among the top 50 global beauty brands. But it’s a serious contender. The company was founded in 1978 and is based in Blaine, Minnesota; it’s known and respected for plant-based beauty products sold in Aveda stores and in nearly 7,000 salons in 24 countries. I hadn’t heard of Aveda products for nails—only hair and skin—but maybe, I reasoned, I’d just missed the memo. After all, the typography of the sign sure looked a lot like Aveda’s all-caps sans serif font.

A sidewalk sign near the Coming Soon storefront offered a free pedicure to the first 500 people who signed up at AvedaNailSpa.com. (Don’t Google it; the URL no longer works.) What the heck? I signed up.

A couple of weeks later, here’s what I received in my inbox:

Uh-oh. Not only did the kitschy-ugly email not resemble Aveda trade dress in the slightest, but there was also something fishily inconsistent about the spelling. Aveda? Or Aveida? Well, the URL was now AveidaNailSpa.com. (That URL now dead-ends, too.) And then there’s “join our guestbook with us” and “the salon was suppose to be completed” and “due to the recent weather condition.”

My Trademark Antenna (an authorized variation of Spidey Sense) was tingling.

I strolled down to see how the shop was coming along. The “Aveda Nail Spa” banner had come down, and in the window was this sign: 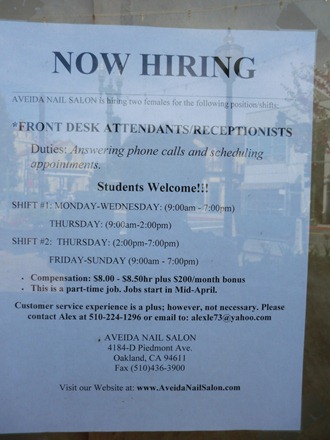 Hmmm. Now it was clearly “Aveida.” And no longer a “spa” but a “salon.” The URL had changed again. (That one still works.) And, by the by, what was up with “hiring two females”? Doesn’t that violate some  regulation or other?

Now, I’m not a trademark lawyer, or any kind of lawyer,  but if my 20 years in name development have taught me anything, it’s this: Don’t mess with someone else’s trademark. Especially when the other mark is in the same category of goods and services as yours. Extra-especially when you have everything to lose and the company whose mark you’re messing with has a fully staffed, straining-at-the-leash legal department.

Also? Adding a single letter to the spelling while maintaining the original pronunciation is not an excuse, a defense, or a loophole. In fact, I think I can hear the USPTO laughing right now.

I strolled by again a couple of days ago. The temporary banner had been replaced by what looks like a permanent sign. 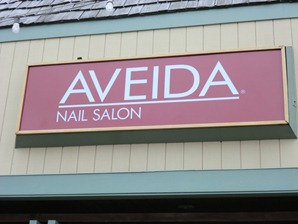 Is that an ® symbol? They've gotta be kidding.

I wouldn’t count on it being too permanent, though. In fact, I’m hoping the authentic Aveda, back in Blaine, Minnesota, releases its legal hounds. We don’t need a 74th nail salon in our neighborhood. Especially an unethical one.

P.S. Thanks to Jessica Stone Levy of Beauty Marks for the title of this post.

* “Not intended to be a factual statement.”

Posted at 06:58 AM in Beauty, Confusion, Oakland, Trademark | Permalink

In (IIRR) Rochester, NY there was (maybe still is) a furniture store called Harrold's which had ALMOST exactly the same logo as Harrod's in Knightsbridge in London: same typeface; same colour; same slant. Only an 'L' had been added, presumably to protect the innocent.

Aw shucks. Though I do love it when they tee it up for me.

Great post. Quick corollary to your "Don't mess with someone else's trademark" rule...especially don't if said trademark is a wholly owned subsidiary of a global mega-brand like Estee Lauder (which Aveda is) who not only have a fully staffed legal department, but probably floors of lawyers in NY with little to worry about but protecting their multiple-million dollar brand acquisition. Nice try though.