Year of the Tiger

Yes, I know: In the Chinese zodiac, this is the Year of the Rabbit; last year was the Year of the Tiger. Nevertheless, I have my eye on the tiger as a leading candidate for the 2011 word of the year.

Let’s start with the celebrity connection: the crazy/canny antics of Charlie Sheen. Mr. Sheen has famously claimed that he has “tiger blood” (and “Adonis DNA”). Now fast-acting Harcos Laboratories* brings you all the bi-winningness of tiger blood in a convenient IV bag. 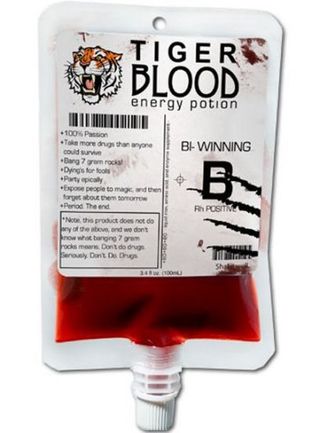 It went on sale last week at It’Sugar [sic] in Emeryville, California, and is said to taste like fruit punch. (UPDATE: The photo is missing because Harcos renamed the product Blood Energy Potion.)

But “tiger” was trending even before Mr. Sheen began his “series of remarkably unhinged interviews.” Here are the tigers I’ve spotted in the wild since the beginning of the year:

Battle Hymn of the Tiger Mother, Amy Chua’s controversial best-seller about her strict (and apparently successful) Chinese child-rearing techniques. Read “Why Chinese Mothers Are Superior,” the excerpt that caused much of the furor. Chua later said the title of that excerpt was misleading. Published January 11.

Roar of the Tiger Cubs, a rushed-into-print response to Amy Chua’s book authored by a pair of 10-year-old Hong Kong twins, Estephe and Perrine Corlin (possibly with adult assistance). Published March 4; available only in Hong Kong bookstores (so far). Thanks to Ellen Goodman, who lives in Hong Kong and wrote about the twins’ book in her blog, for alerting me to this development.

Tiger, Tiger, Margaux Fragoso’s memoir of her 15-year relationship with a pedophile that began when she was 7. The New York Times Sunday Book Review praised Fragoso’s “narrative abilities.” Published March 1.

A Tiger in the Kitchen, Cheryl Lu-Lien Tan’s “memoir of food and family.” Ms. Tan was born in a Tiger Year; the book shares a title with her blog. Published February 8.

Bengal Tiger in the Baghdad Zoo, a new play by Rajiv Joseph that opens on Broadway March 31. Robin Williams stars as the tiger, who “haunts the streets of present day Baghdad seeking the meaning of life. As he witnesses the puzzling absurdities of war, the tiger encounters Americans and Iraqis who are searching for friendship, redemption and a toilet seat made of gold.”

Well, at least we’ve moved on from cougars.

Posted at 06:40 AM in Books, Food and Drink, Humor, Word of the Year, Words | Permalink

Given that tigers are a critically endangered species and that much of their recent destruction has been brought about by a belief among some stupid people in the magical powers of its body parts, I find this marketing concept to be in very bad taste. And that's even though I know that 'Tiger Blood' has never been anywhere near a real tiger.