Word of the Week: Amigurumi

Amigurumi: The art of knitting or crocheting small stuffed animals and anthropomorphic creatures. The word is formed from the Japanese words ami, meaning crocheted or knitted, and nuigurumi, meaning stuffed doll.  (Source: Wikipedia, which adds, “The prevailing aesthetic of amigurumi is cuteness”—a subject that merits its own Wikipedia entry.)

In “Zombies & Robots & Bears, Oh My!,” published in Crafts, Volume 1, Mary Belton writes that the stitched-doll trend started in 1997, when an art student named Sun-Min Kim created the first Uglydolls. By 2003, Belton writes, “Uglydolls were a bona fide hit.” Two years later, a new online crafts marketplace, Etsy, introduced a larger variety of amigurumi to online customers. Early in Etsy’s existence, company founder Robert Kalin organized an amigurumi contest in which he encouraged “mashups and mutants.” According to Belton,

Here’s an example from San Francisco amigurumi artist NerdJerk (“Inspiring smiles one geek at a time”).* 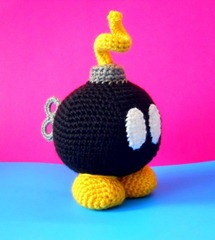 *I discovered NerdJerk at one of the craft sales hosted by Berkeley craft studio Knit-One-One.

Previously on Word of the Week: Yarn bombing.

Posted at 06:33 AM in Creativity, Culture, Japanese, One X at a Time, Word of the Week | Permalink

After reading this, I had to go hunt down that pirate squid.

I was going to mention that I'd written on a couple of amigurumi before, but then I realized that I didn't know whether there was a distinct plural form of the word.

Thanks so much for the amigurumi love! :) There are tons of great artists in the Bay Area and I'm so glad to be able to represent geekdom in such a rad way. :D