Want your brand to demonstrate how edgy you are? Just insert “death” somewhere in the name.

On second thought, don’t. It’s being done to death.

Exhibit A: Death & Company on New York’s Lower East Side, which gives new meaning to “crossing the bar.”

“No, the grim reaper isn’t a partner at this cozy boîte. … Nevertheless, the cocktails created by head bartender Brian Miller are killer.” – New York Magazine

An explanation of the name appears on the bar’s website:

In 1919 the Volstead Act brought a swift end to nightlife, and the refined craft of the American bartender was outlawed. It was thought that to drink alcohol was to live a life shadowed by death. It was thought by some that these were death and company.

It was thought by me that “these were death and company” made no sense.

Unless, perhaps, it referred to Exhibit B, these Death’s Door Spirits.

It says here that the brand takes its name from the Death’s Door passageway between Washington Island, Wisconsin, and the Door County Peninsula. Available in gin, vodka, and whiskey, all with potent enough alcohol contents to deliver you to the actual door of death if you don’t “savor responsibly.”

What to wear on our macabre rounds? I nominate Exhibit C, the Sudden Death top from Bailey 44, which Nordstrom carries in red, white, and black. “Sudden death” is a sports term, but it’s hard to ignore the suspicion that this model may want to kill you. 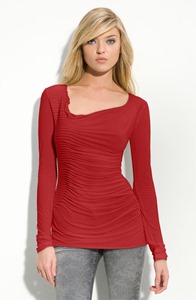 Note to restaurants: We no longer gasp at “to die for” in your advertising. But allusions to the mass poisonings-by-beverage at Jonestown in 1978 are not cool, or Kool. According to AdFreak, the AdWeek blog, Hacienda Mexican Restaurants took down its “We’re Like a Cult with Better Kool-Aid” billboards in Indiana after two weeks of “public outcry and drubbing in the press.” 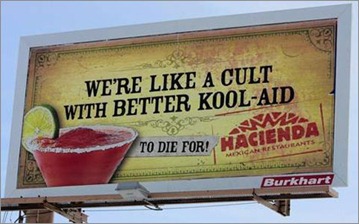 AdFreak’s comment: “A restaurant chain bold enough to associate itself with poison, misery and death? Yum, I'll have seconds!”

“Dead” brands previously mentioned in this blog include Dead Letter Office wine and Dead Fish restaurant. I’ve also written about euphemisms for death. Perhaps some intrepid entrepreneur will choose one of those euphemisms for his next venture. “Just Add Maggots” is rather catchy, don’t you think?

The best-known piano mover in Boston is DEATH WISH, est. 1971 (http://www.deathwishpiano.com/). We used them to move our Steinway some years ago -- they took off the legs and carted the thing out like it was a suitcase. I smile every time I see one of their eerie black trucks tooling down the highway.

I think this one really got rolling a few years back with Death Cigarettes and Black Death Vodka, eh? Truth in advertising, or, getting the worst argument against you out of the way first!

When I was a smoker, I always thought those Death cigs had a real punk glamour.

"Hacienda Mexican Restaurants took down its 'We’re Like a Cult with Better Kool-Aid' billboards in Indiana after two weeks of 'public outcry and drubbing in the press.'"

Hmm. If I were Kraft Foods, I'd've sent them a cease-and-desist letter, but maybe that wasn't even necessary.

And isn't Flavor Aid an odd mark, itself? Kinda like Hamburger Helper, but less precise. Like you could add it to anything - Eggs! Salads! Pork chops!

Well, that Sudden Death top is a really cute. (If I wasn't so lumpy I'd get a few, but even that ruching won't help me. ) Why do they have to sell clothes with such a snotty angle? They have another top called "Out Hustle". For whores? What does that say about the demographic they are aiming at? A group of crabby bitchy bimbos with alarming sense of self entitlement and overweening self esteem? So I am old fashioned but that was my first impression. I look forward to the day when so many fashion models stop looking like super skinny girls with issues and look more like nice girls you'd actually like to meet.
I like the Hacienda billboard as a mild joke, but as advertising, I suspect the ad staff was being paid in margaritas, because that's really dumb. That's great fodder for the "Easily Offended Community". On the other hand were they aiming at a younger demographic whose sense of humor lacks subtlety ?

Another product of note: "Neurogasm®", "Passion in Every Bottle". www./drinkneuro.com. Bottled lust. A big "O" in every fizzy fruity quaff. $3 for a bottle of ecstasy soda seems stiff - oops cheap pun - but at least you know exactly what they are selling.