Word of the Week: Muffler Man 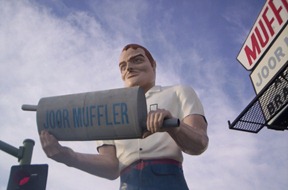 The definitive source for Muffler Man lore is the Roadside America website, which features photo galleries, a guide to subspecies (Noble Savage, Happy Half-Wit, etc.), and an interview with Steve Dashew, whose company, International Fiberglass in Venice, California, created hundreds of Muffler Men between the early 1960s and the mid-1970s, when Dashew retired. Dashew told Roadside America that the first Muffler Man was a Paul Bunyan figure built for the PB Café in Flagstaff, Arizona, in about 1962. After Dashew bought the company in 1963, he signed agreements with Texaco, Phillips, and Uniroyal, as well as with restaurants and retail stores, to make branded versions of the original mold. 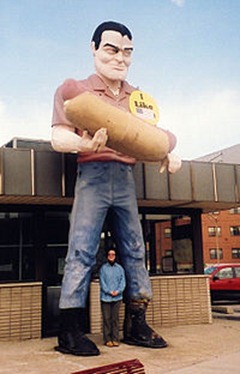 How to identify a Muffler Man. (Roadside America.)

The Uniroyal Gal, rumored to be modeled after Jacqueline Kennedy, came in two versions: bikinied or beskirted.

I’ve seen Muffler Men from time to time over the years and never given them much thought. (Disclaimer: I grew up in Los Angeles, where early and frequent exposure to restaurants shaped like hats, doughnuts, and owls no doubt made me a jaded observer of surreal real estate.) It wasn’t until I read a recent post in Brave New Malden—a British blog, I am chagrined to report—that I learned the term “Muffler Men” and realized that the big statues I’d been blithely disregarding all this time were a recognized folk-art medium.

One of the oddest and most endearing subspecies of Muffler Man is Chicken Boy, who loomed for many years over an eponymous restaurant in downtown Los Angeles. (Broadway between Fourth and Fifth streets, for those who know the territory.) Chicken Boy—a chicken-headed man holding a symbolic bucket of deep-fried chicken parts, something you probably don’t want to think about too deeply—was customized from an International Fiberglass mold in the late 1960s. When Amy Inouye moved to L.A. in the mid-1970s, she took an immediate shine to Chicken Boy; as she writes on the Chicken Boy website, “he communicated to me that if he could be okay living in LA, I could be okay living in LA.” 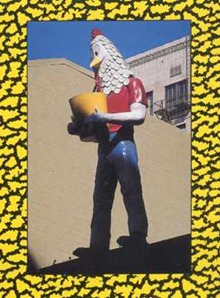 Cover of an early Chicken Boy catalog, featuring the Boy himself.

The restaurant closed in 1984, and Amy Inouye set about saving the statue, which she calls “the Statue of Liberty of Los Angeles.” It took 23 years, but Chicken Boy at last found a new home atop Inouye’s design studio in Highland Park, just north of downtown L.A. In the interim, Inouye published the Chicken Boy Catalog for a Better World, “a catalog of gift items including Chicken Boy logo merchandise and things Chicken Boy would be proud to have in his home or give as a lovely hostess gift.” (I was an early subscriber to the catalog, and I’m happy to say you can still buy many CB items here.)

One more digression: In addition to the beefy, humanoid Muffler Men, there’s a different species of muffler men that are actually crafted from mufflers and other auto parts. Muffler Men, published by the University of Mississippi Press in 2000, is a scholarly examination by folklorists Timothy Corrigan Correll and Patrick Arthur Polk of the handmade muffler sculptures that take the form of “cowboys, dogs, robots, space aliens, and a host of other creatures.” This breed of muffler men is not exclusive to the United States; Correll and Polk report that they’ve heard of sightings in Brazil, El Salvador, Guatemala, Holland, and elsewhere.

Posted at 06:39 AM in Advertising, Art, Culture, Man-Words, Word of the Week | Permalink

When I lived in Philly the term "chicken boy" had a far more sinister connotation...think the Gus van Sant movie "My Own Private Idaho." I think if I saw that statue in LA I'd shiver.