Is it naianoia when you start seeing Nayas and Naias everywhere?

A newish line of women’s shoes that are, according to the official story, “beautiful on your feet, soft on your step and gentle on the environment.” The official story also claims that “Naya means renewal,” but doesn’t specify in which terrestrial language. Anyone have a suggestion? (UPDATE: In a tweet, a Naya Shoes spokesperson informed me that the language is Hindi.)

Despite the spurious-sounding name story, I confess I’m very fond of Naya shoes. My next pair: 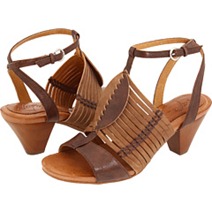 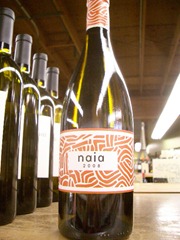 According to Wine.com, this Spanish white wine has a “great nose of lanolin, vanilla biscuits, lemon curd and minerals.”

A Bay Area chain of gelato shops; the first shop opened in 2002. According to the About page:

Naia has many meanings, in Greek it means “flowing” and “pure,” but to us, it also has a special meaning. Naia is the name of one of the owner’s daughter [sic], who was born at the same time our first store opened.

The grammar is shaky, but this etymology is plausible. In Greek mythology a naiad was a water nymph; the root word is νάειν (“to flow”), Nāïas in Latin. Is “Naya” a popular baby name in modern-day Greece? I don’t know. 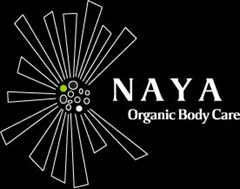 Not just organic—solar-powered, vegan, sustainable, and handcrafted, too! Also “MindFUL and thoughtFUL.” No name-origin story, but lots of exclamation points. Based in Marin County, California. 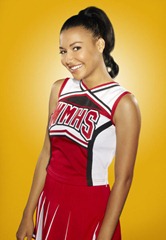 Actress Naya Rivera in costume as Santana Lopez on “Glee.” Photo from PopTower.

And that doesn't include acronyms like the National Association of Intercollegiate Athletics or Ninoy Aquino International Airport (in Manila).

Besides “renewal” and “flowing,” Naya is reputed to mean “captain” (in “Indian,” whatever that means), “new” (in Arabic), and “God answered” (in Hebrew). All of these purported meanings come from popular baby-name sites, and are accompanied by the usual surfeit of romance and lack of scholarly rigor.

My own two cents: I think parents and marketers alike just like the sound and ambiguously exotic look of “Naya” and “Naia,” and they ascribe whatever meaning they like to it.

"Na ja" is also a German slang-ish expression for "well" or "sure," IIRC. So I can't imagine these names travel all that well - it's as if a German company had a product called "Yeahbut."

P.S. "usual surfeit of romance and lack of scholarly rigor" - you couldn't have captured more accurately the hooey some of those baby name sites put forth as name definitions (e.g., Nevaeh is Hebrew for life? Try reading it backwards . . . )

There's also NAYA Natural Spring Water, since 1986. The website writes it in all caps, but doesn't explain why with any kind of etymology.

My friends have a girl named Nyah. I wonder how many other spelling variants there are.

@Neal: Thanks for the reminder about Naya water, which calls itself "the number one Canadian spring water in the world." (http://www.bottledwaterweb.com/bottlersdetail.do?k=57) A Brandweek article published just over a year ago said that Naya "had all but disappeared from the U.S. market" but was positioning itself for nationwide expansion. http://bit.ly/hsXmJi

The Wikipedia entry for Naya water, which is suspiciously light on citations and copyediting, claims that the source of the name is "naiads."

In Italian, "naia" (also spelled "naja") is an informal word for "military conscription" and "military life". A wine named "naia" would make Italians think of some kind of plonk!

Maybe Naya could be the new nickname for Nancy. I was glad to see you had Naya Rivera there...I think she is probably the smokin' hot engine behind the Naya craze...