Knickers in a Twist

Remember last year’s Underwear Week? Fun times, right? It’s been less than a year since our celebration, but with Valentine’s Day bearing down on us, I thought you might appreciate a quick update and a shopping list.

Actually, it’s more like a shopping blacklist: underwear brand names likely to embarrass both you and the object of your affection. Caveat emptor!

Belabumbum. It’s a lingerie and maternity line based in Surprise, Arizona. (Would I make that up?) The name supposedly means “beautiful bottom” in Portuguese, but after I read that the founders have “brought together a ‘mafia’ of smart, motivated women who build on each others’s [sic] strengths and values”—well, all I could think of was “Bada Bing.”

FarmaCell Milk Shorts. Even if your products are “made with a revolutionary natural yarn derived from milk proteins”—heck, especially if the yarn is derived from milk proteins—it’s not a great idea to associate underwear with “milk.” Or “farm.” Or, for that matter, “cell.” Sure, you say it’s short for “cellulite.” But how can I be sure it doesn’t stand for “celibacy”?

The Little Bra Company. It’s not the company that’s little. No, this is a brand for IBTs.

The OverBra. A mysterious name, because this garment fits under the bra. Oh, and a word to the wise: Shapewear does not make a good gift. No one wants her honey suggesting that she needs some extra Spandex to contain her jiggly parts.

Squeem. I wrote about this Brazilian shapewear brand in 2006, but since some of you weren’t even born then, I thought I’d mention it again as a public service. I can’t imagine that the brand name sounds any better in Portuguese than it does in English; maybe “squeem” is what you do, involuntarily, when you’re trussed up in one of these “magical” compression garments. 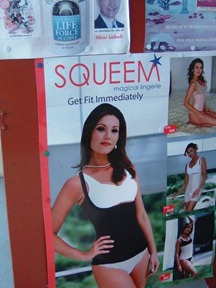 UPDATE: More milkiness! I present to you Milkface nursing bras and maternity clothing. Thanks to Dennis VanStaalduinen for the tip, via Twitter.

Posted at 06:54 AM in Bad Names, Fashion, Holidays, Naming, Retail, They Said WHAT???, Underwear | Permalink

I had an interesting conversation with my wife (born in Brazil) about the Brazilian inspired brands. Her opinion was that belabumbum is "wrong. Bumbum is masculine and would be followed by belo." ...I'll get back to you on Squeem.

The conclusion I draw, which I hope perhaps other underwear marketers will heed, is that the word "milk" is one of the most unappealing terms possible when used in connection with underwear - or pretty much any other product. Milk of magnesia, anyone?

Another product name you might consider for this hall of shame is "Fungals" - panties for young girls:

@Stan: From the fun guys who brought you Underoos®.

I took a look around on the Milkface website, and I kind of liked what I saw. How about the My Brest Friend nursing pillows? Not to mention the Boob Smock Cami. (Actually, there are a lot of garments with Boob in the name.) I think someone there is having a lot of fun.