Girl Scouts Take a Bite Out of Cookie Selection

Get out your checkbooks: February is Girl Scout Cookie month. This year, the pickings will be slimmer than in the past, according to the Wall Street Journal, which reported last week that “[t]o cut costs and increase revenue, a dozen Girl Scouts councils are testing out a plan to hawk just six different cookies.”

Some councils are saying “No, thanks” to poorer-selling varieties Thank U Berry Munch, Thanks-A-Lot, and Dulce de Leche. 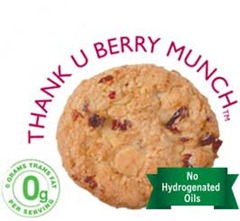 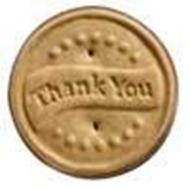 I’d be inclined to axe Thank U Berry Munch and Thanks-A-Lot on the basis of their names alone: an excruciating pun and needless texting abbreviation in the former; implied sarcasm in the latter. (Yeah, thanks a lot.) On the other hand, Thanks-A-Lot shortbread-and-fudge cookies were multilingual—each one was embossed with “thank you” in English, French, Chinese*, Swahili or Spanish—and I’m all for that. Likewise, I’m rather sorry to say adiós to Dulce de Leche, because I think more kids, and adults, should be exposed to non-English cookie names.** Also, I’m partial to caramel. 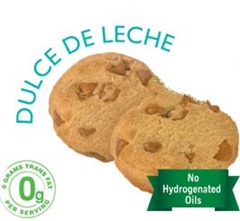 As for Thin Mints, it’s one of the most perfect cookie names ever coined. Not only does it include a memorable internal rhyme, but it incorporates the magical thinking of “thin.” Eat these cookies, the name suggests, and you won’t gain an ounce! (Sorry to disappoint: Each Thin Mint has 40 calories, almost half of them from fat.) 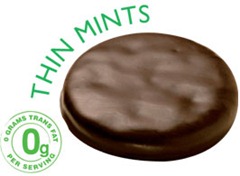 Possibly because I’ve never bought or sold Girl Scout Cookies outside of California, I was surprised to learn that some of the varieties have different names in other parts of the country.

Cookie names are chosen by the two licensed bakeries that divide up the orders each year: ABC Bakers in Richmond, Virginia, which has been making Girl Scout Cookies since 1937; and Little Brownie Bakers in Louisville, Kentucky, on the job “for over 35 years.” Only ABC Bakers makes Shout Outs!, “Belgian-style caramelized cookies” with “zero grams trans fat per serving, no artificial colors, no artificial preservatives, no high fructose corn syrup and no hydrogenated oils.” Shout Outs! are stamped with inspirational verbs, like fortune cookies without the suspense. The Girl Scouts of the USA began selling home-baked cookies in 1917 to raise money for troop activities. Into the 1930s, according to the official Girl Scout Cookies history, “Girl Scouts in different parts of the country continued to bake their own simple sugar cookies with their mothers. These cookies were packaged in wax paper bags, sealed with a sticker, and sold door to door for 25 to 35 cents per dozen.” (A box of Girl Scout Cookies today costs between $3.50 and $4.) In 1934, the Greater Philadelphia council became the first Girl Scout organization to sell commercially baked cookies, and by 1937 other councils had followed suit. 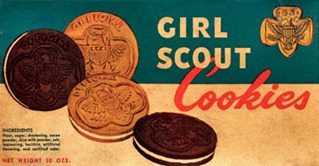 During World War II, because of ingredient rationing, Girl Scouts switched to selling calendars to raise money. After the war, local bakers—as many as 29 by 1948—were licensed to bake Girl Scout Cookies. There were just three varieties in 1951—Chocolate Mints (the forerunners of Thin Mints), Sandwich (see box photo, above), and Shortbread.

Over the decades, the number of licensed commercial bakeries was consolidated to the current two and the number of cookie varieties grew and fluctuated. Discontinued varieties have included Van’chos (vanilla and chocolate sandwich cookies; the name appears to be a portmanteau of vanilla and chocolate, perhaps with a little gaucho/macho/honcho thrown in), All Abouts, Juliettes (named for Girl Scouts founder Juliette Gordon Low), Double Dutch, Ice Berry Piñatas, Café Coolers, Aloha Chips, Lemon Coolers, Sugar Free Chocolate Chips, and Apple Cinnamon.

Not a fan of commercial baked goods? Then make a cash donation to your local Girl Scout troop and bake your own cookies. The Baking Bites blog has recipes for homemade versions of many popular Girl Scout Cookie varieties, including Thin Mints, Samoas, and Do-Si-Dos.

* There is no universal Chinese language, but my source doesn’t specify Mandarin, Cantonese, Taiwanese, etc.

** And they should learn to pronounce their names correctly. “Dulce,” the Spanish word for “sweet,” is pronounced DOOL-say, not DOHL-chay. I’m talking to you, Steve Inskeep of NPR’s Morning Edition.

Posted at 06:59 AM in Food and Drink, Naming, Nonprofit, Nostalgia | Permalink

In Boston we have Thin Mints, Peanut Butter Patties, Shortbread, Thanks A Lots, Shout Outs, Lemonades, Caramel de Lites, and Peanut Butter Sandwiches. And I already placed my orders in January.

I wonder if the Boston-area Girl Scouts switched bakeries at some point, because we used to have Do-Si-Dos, Trefoils, Samoas, and Tagalongs. I was really confused the first couple of years after the switch. Which is why companies should be very careful about switching product names.

The name changes over the years didn't worry me because I never remembered the names anyway. I just ask for anything with lots of peanut butter or caramel. Of course I always remember Thin Mints by name! They'll never chnage that name.

Thanks for the cookie lore! I used to buy my thin mints at Castro/18th, and the stand was always mobbed with the boys of the hood. I'd be curious to know where it ranked in sales with other locations.

I was really surprised to see my Boston-area cookie selection returned to the original Samoas and Tagalongs this year, after they had switched a few years ago (as noted above). The banishment of "Samoas" and "Tagalongs" is kind of joke among people I know, since so many of us have fond childhood memories of eating GS cookies with those names. I have never understood why the switcheroo and am even more perplexed by the apparent switch back!

@MRP: For the longest time I thought Tagalongs were a Filipino delicacy.