« Bouquets and Brickbats | Main | Word of the Week: Boffin »

My admiration for retailer Anthropologie’s nomenclature is a matter of public record. I appreciate the whimsy of Who’s Got the Button Top, the alliteration of Scaffold & Scrim Cardigan, the bilingual savoir-faire of Stazione Trench, the specificity of Rotherhithe Oxfords. I like the literary character of these names, and I admire the obsessiveness that nurtures them.

Which is why I was puzzled and, yes, bewildered when, earlier this week, I received an email announcement of Anthropologie’s new spinoff, which launches on Valentine’s Day. 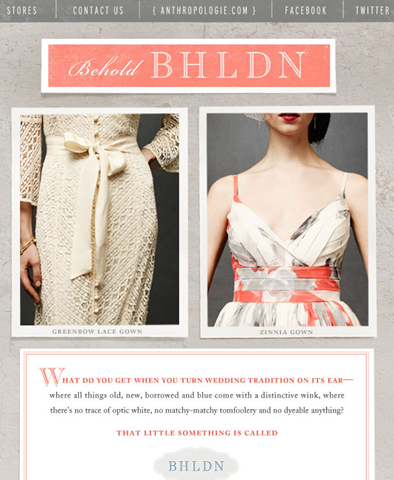 What is this BHLDN? Is it an acronym? (“Brides Heart Low Droopy Necklines”?) A large legal partnership? A stock-exchange symbol? A texting abbreviation?

No, apparently we’re meant to take our cue from “Behold”: We’re supposed to fill in the blanks and pronounce the brand “Beholden.”

Because while both “behold” and “beholden” come from the same Old English source, their meanings diverged almost 600 years ago. “Behold” lost its “hold” sense and today means “observe” or “look upon”; while “beholden,” a rarely used adjective, maintains its archaic meaning of “morally obligated” or “duty bound.”

The fact that “beholden” is archaic bothers me less than the fact that it’s so inappropriate for a bridal business. BHLDN has no romance, no elegance, no flirtatiousness: it lacks any of the promise one seeks in a bridal brand. If Anthro wanted us to think “to have and to hold,” they’ve missed the mark. If they wanted us to think that a bride is “beholden” to her mate, they’re just cuckoo.

Then there’s the mystery of the capital letters and the missing vowels. What was Anthropologie thinking? (The press, by the way, has been divided on how to represent the name: New York Magazine spells it Bhldn; Glamour spells it BHLDN. Fashion blog TheGloss spells it BHLDN and originally speculated that the name was to be pronounced “Buildin’.” Way to spread a consistent message, Anthropologie.) Was the marketing team taking a cue from publicly traded parent company Urban Outfitters, Inc., which now styles itself as URBN (its ticker symbol and URL)? At least URBN has one vowel. BHLDN isn’t edgy or alternative; it’s dopey. It  begs to be backronymed: “Betty Has Less Draper Now.” “Bless Her Little Drippy Nose.” “Blink Hard Learning Dismal News.”

Sorry, Anthropologie. This isn’t “turning tradition on its ear”—it’s slathering three-egg omelet on your face.

In other news, beginning tomorrow (Friday) I’ll be stepping away from 21st-century technology for a few days. If your comment doesn’t reach me before I untether, I’ll review and publish it on Monday.

Posted at 06:38 AM in Acronyms, Bad Names, Consonants, Names in the News, Naming, Retail, They Said WHAT???, Vowels | Permalink

The sad part for me is that the name is so distracting from the dresses. It's as if you had a large "PEDXING" sign in your garden.

A former colleague of mine just started a company called "DQtrs"...
http://dqtrs.com/DQtrs/DQtrs.html