Jim Mitchem, whose Twitter bio says he’s a “communications tactician,” has posted a critique of a ProFlowers ad that he saw on Weather.com. 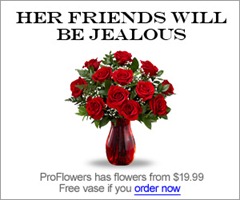 “The problem with the ad is the headline,” Jim writes. Fair enough: I don’t like it either. But then:

Her Friends Will Be Jealous implies that I will buy these flowers. Meh. Maybe I will, maybe I won’t. It’s passive logic. And you can’t afford to be passive when your audience isn’t really paying attention. Passive logic in advertising is roadkill.

He’d rewrite the line as “Make Her Friends Jealous.”

Boom. It’s quicker. It’s a call-to-action. It’s got some swagger. And most importantly, it’s active voice.

I agree with Jim that the ad could be more effective. But that’s where we part company. Jim is wrong about “passive logic” (I’m not even sure what that means) and “active voice,” he’s wrong about “swagger,” and he’s completely missed the biggest error in the ad.

Let’s take a closer look, shall we?

1. There’s nothing passive, logically or grammatically, about “Her Friends Will Be Jealous.” It’s written in the future tense—and the active voice. For the sentence to have a passive construction, it would have to say something like “Jealousy Will Be Caused by These Flowers.”

2. I suspect that what bothers Jim is the ad’s use of the verb “to be”; like a lot of people, Jim confuses “to be” with “passivity.” While it’s true that “to be” is often a weak verb in copywriting, “conceptually weak” is not synonymous with “grammatically passive.” And sometimes “to be” is OK in copy. As for the future tense, it happens to be a theme in this ProFlowers Valentine’s Day campaign. Here’s another example: 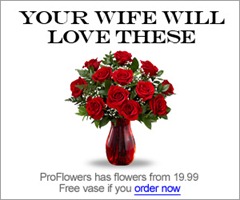 Again: not a scintillating line, or even a well-written one. (For starters, let’s change “these,” an adjective, to “them,” a noun.) But it’s not by any definition “passive.”

(For a comprehensive analysis of the passive in English, and the many ways in which people misdefine it, see Geoffrey K. Pullum’s 2,500-word post for Language Log. The gist: “Passive [like its opposite, active] is a technical term. Its use in syntax has nothing to do with lacking energy or initiative, or assuming a receptive and non-directive role.”)

3. Unlike Jim, I don’t object to the predictive tone of “Her Friends Will Be…” It doesn’t ask you or order you to buy flowers, it assumes that of course you will. That assumptive stance is often an effective sales technique. (Clearly not for Jim, who proclaims that he’s “not a flowers-on-Valentine's guy and my wife is cool with that.” But for some guys.)

4. Jim wants to see more “swagger” in the headline. Really? I’ve written copy for a flower retailer similar to ProFlowers, and I’d argue that “swagger” is an ill-advised approach for Valentine’s Day. This isn’t the occasion for bullying or dictates. You want to create a customer, not browbeat an adversary.

5. As for the grammar of “Make Her Friends Jealous,” the voice is equally as “active” as in “Her Friends Will Be Jealous.” It’s just written in the imperative mood rather than the indicative.

6. Here’s what Jim overlooked: “jealous” is in every way the wrong idea—and, worse, the wrong word. Talking about jealousy on Valentine’s Day? Ouch. (A moment of silence, please, for poor Desdemona.) Talking about her girlfriends on Valentine’s Day? Buddy, you’re not even supposed to notice them. And the worst part: the correct word here is “envious,” not “jealous.” The two words are often confused but mean different things. Here’s Brians’s Common Errors in English, an unimpeachable source:

Substitute “boyfriend” for “girlfriend” and “Valentine’s Day bouquet” for “CD collection” in the second example and you get the picture.

To be safe, I’d steer clear of all green-eyed monsters in Valentine’s Day copy. And if I were ProFlowers, I’d fire the agency responsible for those online ads and give the job instead to whoever’s writing the web content, which is more graceful and persuasive. (See screen grab, below.) “How Will You Spoil Her?” is in every way superior to either of the banner ads depicted above. 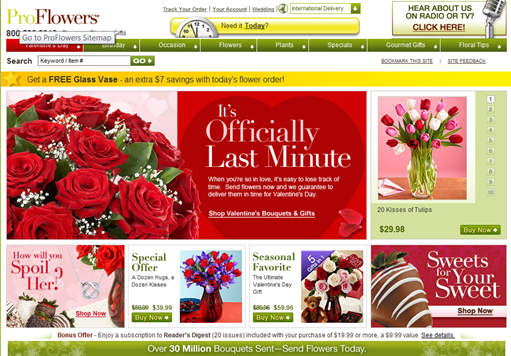 Posted at 06:40 AM in Advertising, Grammar, Holidays, Usage, Writing | Permalink

And "jealous" though it has a better ring, isn't the right word contextually either. "Envious" would be more correct.

Wow...excellent post, Nancy! I, too, was unconvinced by Jim's argument besmirching the ProFlwers ad. Your analysis, on the other hand, was outstanding. And I agree: "How Will You Spoil Her?" should be the theme of the entire campaign. What a great line. I love it, and I'm sure my wife would, too.

Jim may be wrong about what’s active and what’s passive, but I wouldn’t fault him as to “jealous.” Regardless of the unimpeachable sources, “jealous” and “envious” have some overlap, and “jealous” is very commonly used where you would insist on “envious.” I totally disagree on “these” being only an adjective that should be replaced by “them.” The pronoun use of “these,” per the OED, goes back as far as the adjective use. You can even have both forms in the same sentence: “We hold these truths to be self-evident, that all men are created equal, that they are endowed by their Creator with certain unalienable rights, that among these are life, liberty and the pursuit of happiness.”

And so is "these", a demonstrative rather than personal pronoun.

Nancy, this was a delicious read.

I agree with the distinction you draw between jealousy and envy.

I am someone who has often been the recipient of beautiful flowers when it has been very clear that the message conveyed was intended for another audience.

I have known at least four women who have secretly ordered lavish bouquets on Valentine's Day for themselves, to present a certain image in the workplace. (And I suspect a few others.)

Each wanted to create the impression that she was cherished. Don't be so sure that envy is not part of the equation; there is a lot of "rug ranking" in corporate settings around V-Day. The feminine psyche is complex and varied on February 14ths.