« Such a Blessing! | Main | Girl Scouts Take a Bite Out of Cookie Selection »

Word of the Week: Pogonip

Pogonip: A dense winter fog containing ice particles, found in mountain valleys of the western United States. From Shoshone pakenappeh or paγɨnappɨh, “thundercloud.” In Greek, pogo- or pogon- means “beard,” and English-Word Information speculates (possibly facetiously) about a relationship between pogo- and pogonip. It’s true that the ice crystals can make leaves and other structures appear bearded.

Pogonip is not to be found in the Oxford English Dictionary, The Handy Weather Answer Book, or my 1984 edition of The World Weather Guide. It is, however, in the Dictionary of American Regional English, which gives 1869 as the date of the first extended citation for the word. By that year the word had already attached itself to at least one western geographical feature:

Pogonip Flat offers no shelter whatever from the fury of the bleak, cutting blasts . . ; and here, too, it is that the dense piercing fog hangs from hour to hour in the dull dreary days of the winter. Hence “Pogonip” is now the conventional term for a roaring, piercing, cutting, bleak, merciless snow-storm, with all the furies of Boreas cut loose and filling the air with hideous noises.

The Wikipedia entry notes that pogonip forms only under specific conditions:

[T]he humidity has to be near 100% as the air temperature drops to well below 0°C (32°F), allowing ice crystals to form in the air. The ice crystals will then settle onto surfaces.

Pogonip is the name of a creek and a greenbelt district in Santa Cruz, California, and was once the name of a golf course, polo grounds, and clubhouse there. The Santa Cruz Public Library website includes this bit of folk etymology:

Many mistakenly believed “Pogonip” was an acronym for PO-lo, GO-lf and a NIP at the clubhouse bar. But the area was named for Pogonip Creek, after an Indian word meaning “river fog.” 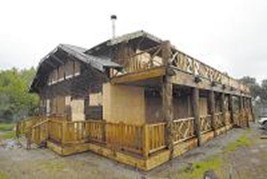 Weather-related words of the week in the archives: thundersnow, pyrocumulus, snizzle, petrichor, and orography.