Word of the Week: Hoon

Hoon: To drive recklessly. Usually used with “around” or “round.” Also a noun: “One who drives excessively quickly, loudly or irresponsibly” (source: Wordnik); a street drag racer. 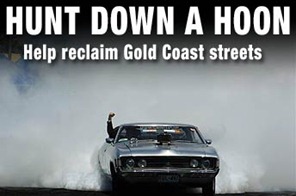 Image from Goldcoast.com.au, an Australian news site. The article, about suburban anger over “illegal and dangerous road acts,” is headlined “Dob in a hoon.” To dob means “to inform on.”

The OED antedates the noun hoon to 1938 and to verb to hoon round to 1983. Both are Australian and New Zealand slang that, according to linguist Sid Baker, author of The Australian Language (1953), derives from houyhnhnm, the fictional race of horses in Jonathan Swift’s Gulliver’s Travels.

Hoon has “a semi-official use in Australia,” according to the Wikipedia entry, “with police and governments referring to legislation targeting anti-social driving activity as ‘anti-hoon laws’.”

But usage appears to be spreading to other parts of the English-speaking world, at least among auto enthusiasts. I first encountered hoon in a recent TechCrunch post by Matt Burns, “2010 in Review: Videos Where We Hoon Around in Cars.” When I tweeted about this unfamiliar word, Charles G. Hill of Oklahama City (@dustbury) informed me that the automotive website Jalopnik posts a Hoon of the Day. In the HOTD for December 20, Mike Spinelli writes:

He can't ollie, but Team O’Neil instructor Wyatt Knox did figure out another way to grind a 1992 Subaru Legacy using a felled tree, an icy approach and a dab of oppo. Well yes, someone had to try it.

An ollie is an aerial trick in skateboarding and snowboarding named for its originator, Alan “Ollie” Gelfand. Oppo is British slang meaning “opposite number, friend, mate.” (UPDATE: This is in fact one definition of oppo, and Wyatt Knox does depend on the assistance of a friend in the video, but see Chris’s comment, below, for a more pertinent definition.)

Posted at 06:30 AM in Australian, British, Cars and Motorcycles, Slang, Word of the Week | Permalink

Oppo in this context means opposite lock on the steering wheel.