I saw this sign at Sports Basement in San Francisco’s Presidio: 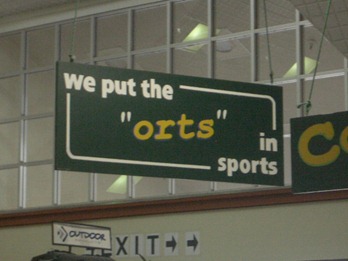 The slogan is a variation on the moderately popular snowclone “We Put the X in Y.” What does it mean? Keep reading.

Back in 2004, linguists Geoffrey Pullum and Mark Liberman wrote separate posts about this snowclone for Language Log. Pullum cited an email from Virgin Airlines that awkwardly touted the company as “the carrier that puts the ‘v’ into ‘value’ for money.” (Because otherwise you’d just have “alue for money”?) Liberman provided a bunch of examples sent in by readers, including “We put the YOU in YOUnique,” “We put the ass in Massachusetts,” and “We put the mock in democracy.”

One of the cleverest—and oldest—variations is an ad slogan for Typhoo Tea that originated in England in the 1940s or perhaps earlier: “Typhoo Puts the T in Britain.” You can see the slogan on the miniature red replica truck in this photo (which unfortunately isn’t reproducible, at least not with my limited techno tools.)

“The Simpsons” is responsible for two of my favorite variations. “We Put the Spring in Springfield” is the bouncy anthem of Maison Derrière, Springfield’s very own bordello (“No, burlesque house!”). The video doesn’t embed, but you can listen to the song here.

Then there’s the motto of the Springfield Christian School, featured in the “Whacking Day” episode in Season 4: “We Put the Fun in Fundamentalist Dogma.”

By comparison, the Sports Basement sign may seem simply goofy. But maybe not. “Orts” is not a meaning-free phoneme, after all; in fact, it’s well known to crossword solvers as the plural of ort, “the remains of food after a meal,” or by extension any scrap or fragment. It came into English in the mid-15th century, possibly from Dutch ooraete. The truly word-besotted will recognize “ort” from the name of a language blog, Martha Barnette’s … Orts. The blog has been dormant for the last two years, but Ms. Barnette is still the co-host of the public-radio program “A Way With Words.”

What does this have to do with Sports Basement? Well, the store sells “the best brands at basement prices,” and much of the merchandise is discontinued stock—the orts of sporting goods, you might say. And humor is very much part of the company’s brand: the official blog, Basement Buzz, promises “events, news, and bad puns.”

So whether or not Sports Basement’s customers realize it, that sign may actually be delivering an ort’s worth of truth in advertising.