Ever since I published a short post about the plural of Prius back in January 2008, not a day has gone by without at least one correctness-driven auto fan (or Latin-grammar nerd) landing on my blog by way of that search term.

Evidently Toyota also has noticed this fascination. Here’s the small print from a full-page ad that appeared Monday in the main news section of the New York Times: 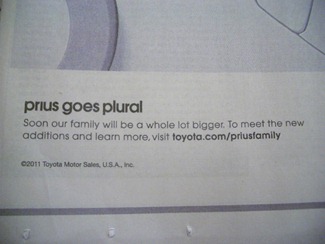 Here’s the main headline and text:

Don’t get the garage ready just yet. The first new model, whose concept name is Prius v, will go on sale in late summer of this year. The second, the Prius c, isn’t due until the first half of 2012.

According to the press release, the “v” in Prius v stands for “versatility” and the “c” in “Prius c” stands for “city.” Fast Company’s design blog capitalized the “c” and said the Prius c is “like the Honda Fit, but much hipper.”

Update: From today’s ad in the Times: 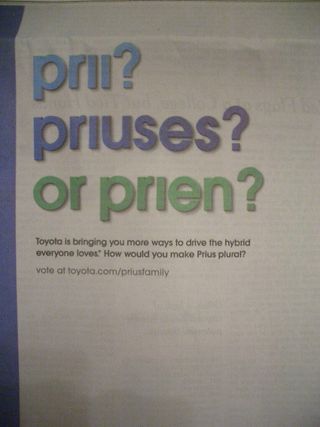 Posted at 06:21 AM in Advertising, Cars and Motorcycles, Grammar, Naming | Permalink

I had the same wonders about pluralizing "Lexus." Would it be "Lexora" then? I was calling them "Lexi."

If the Winkelvoss twins of "The Social Network" fame became the Winkelvii, I'd certainly be inclined to go with Prii. But basically I'll wait for you to decide and then I'll do anything you tell me.

Well, I'm sure you know my attitude about all this. :-) I'm amused that Toyota is using this for marketing, tho. It's not _that_ often we get an intersection between marketing, grammar, and humor. ("What do you want, good grammar or good car?")

While I very much enjoy the debate about the correct way to render Prius plural, I've been known to refer to more than one such car as Toyotas Prius (see Attorneys General).

I really have to disagree that the Latin versions are appropriate here and posit that the plural is "Priuses." It is a proper noun, not a Latin one. Similarly, we do not correct the spelling of the Dodge Millenia, however much it drives editors crazy (no pun intended).

I'm with Mike, and I kind of like that they included "Prien" as a choice. I wonder if it was a nod to "vaxen" as plural of "vax" (the computer system), or if it was more a reference to brethren/children/oxen, the latter of which apparently inspired "vaxen."

But if the question is addressed seriously, I can't see how the plural would be anything other than Priuses (and Lexuses). This is English after all!

add automobile after Prius and make it a plural

@Christina and @Lukobe -- entirely correct, at least imo. The default in English is to add -(e)s, and unless there's a historical irregular plural (mice, geese, sheep) or a noun can attach to itself one of the very few remaining irregular forms of plural (yen), -(e)s it is.

I do wonder to what extent this was discussed at Toyota before they settled on the brand name. Nancy, do you have any insider-type insight into how much companies consider the grammatical implications of their brand names, whether as nouns (Prius) or verbs (Google)?

@Mike: In a perfect world, companies and their agencies would thoroughly vet all name candidates for grammatical implications. It's certainly one of the services I provide my naming clients. And trademark lawyers still insist that a trademarked name should properly function only as an adjective ("Google search engine") and never as a verb. But in the real world, and especially in the start-up world, a lot of impulsive behavior and know-it-all-ism often surround the selection of a name.

I have no insider info about the Prius name; I'm not even certain whether it was coined by Toyota's Japanese division or its US one. But coined it is, and here in English-speaking North America we should treat it as an English word with a regular plural: Priuses. The -us ending makes it Latinish, not Latin; the pluralization is no different than bus > buses. Anything else would be silly ... but, admittedly, excellent marketing.