« Architectural-Firm Names: The Ridiculous and the Regrettable | Main | Word of the Week: Presentism »

A little more year-end business, and then it’s in with the new.

Brand New picks the best and worst identities (that’s “logos” to you civilians) of 2010.

WTF is the word of the year, declares Dennis Baron on his blog, Web of Language. OMG, he has a point!

It was a very good year for “jargon, mixed metaphors, and ridiculous euphemisms,” writes the Financial Times’s Lucy Kellaway. Read her 2010 Management Guff Awards (reprinted in the Irish Times). (Via The Name Inspector.)

DTF, mantrum, and other top terms we learned on reality TV in 2010. (Via my brother Michael.)

Voting is still open for Macquarie Dictionary’s 2010 Australian words of the year. Winners are traditionally announced in early February. I’d like to see screwage—a cynical synonym for “corkage”—gain wider acceptance up in this half of the world. (Via Ben Zimmer.)

Let’s bury the not-a-word myth, writes Mark Peters in GOOD magazine. “These not-a-word claims are silly, illogical, and can mostly be summed up like so: ‘I hate this word, therefore it is not a word. So there.’ This makes as much sense as a deranged birdwatcher who, for some reason, decided warblers were the devil’s work and therefore lacked bird-ness.”

How eight famous cheeses got their names. I’ve eaten Monterey Jack practically my entire life and never known who Jack was.

How to get anyone to do the dishes—or, by extension, to buy whatever you’re selling. On the always-readable Copylicious blog. 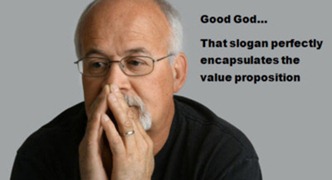 Why are Z and X so popular in drug names? Hint: Think Scrabble. (Via Our Bold Hero.)

Should I work for free? Probably not, but check the chart anyway.

Department of Meta: The most amazing press release ever written.

And just for fun: What were the best-selling books on your birth date? If you were born on January 14, 1965, works by Saul Bellow, Louis Auchincloss, Gore Vidal, General Douglas MacArthur, and Jean-Paul Sartre occupied top positions on that week’s best-seller list. Last week’s equivalents on the New York Times nonfiction and fiction lists? Dean Koontz, Tom Clancy, Justin (Shit My Dad Says) Halpern, Glenn Beck, and Sarah Palin. Draw your own conclusions. Oh, and happy birthday.