How Warby Parker Got Its Name

Warby Parker sells eyeglasses that combine low price (generally $95 per pair, which includes prescription lenses) with hipster style. The company offers a virtual try-on service—upload your photo to the site and see how different frames might look on you—and a free five-day home try-on for up to five pairs. For each pair of glasses the company sells, it donates a pair, through a nonprofit partner, to someone who lacks access to vision care. 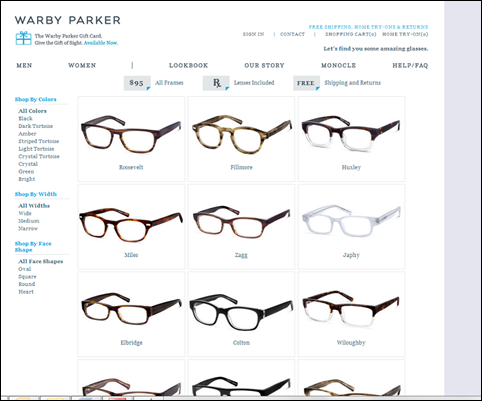 The company was founded in February 2010 by four friends who were attending the Wharton School of Business—but they didn’t draw on “Wharton,” “B-school,” or any of the founders’ surnames to create their quirky company name. Instead, co-founder Neil Blumenthal told MensFlair, the name “comes from two characters found in Jack Kerouac’s unpublished journals, Warby Pepper and Zagg Parker.”

The founders planned to start small, according to an article in the New York Times (“Defying Conventional Wisdom to Sell Glasses Online”).

But then GQ and Vogue.com wrote about the site. In 48 hours, the company had run out of loaner frames and was about to sell out of glasses. The founders called an emergency meeting because their site was not able to indicate when frames sold out.

In three weeks, they had beaten their first-year sales targets. They have run the company on cash flow plus their savings and two small loans.

Frame names are inspired by literature (Huxley, Roark, Zagg, Finn, Japhy*), history (Roosevelt, Fillmore, Hudson), and other sources that may or may not include the names of hipster friends’ babies (Madyson, Harper, Aubrey). Warby Parker also sells a monocle called Colonel.

* Japhy Ryder, a character in Kerouac’s The Dharma Bums, is said to be based on the poet Gary Snyder.

Posted at 06:35 AM in Books, Fashion, How They Got That Name, Naming, Retail | Permalink

I've always thought eyewear prices were a major scam. Good for them. How do you know that babies' parents are "hipsters"? Is that determined by their babies' names?

Suddenly I feel a great desire to own a monocle. I didn't know they were even a thing anymore. Thanks for the enlightenment!