A Man Walks into a Cliché…

No, really: That’s the name of the bar.

So very elegant. And exciting. And “knowledgable.”

I’m not detecting a shred of self-aware irony here. 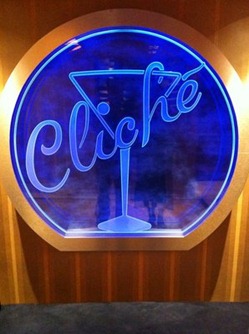 Photo by Jeffry M. at Yelp.

Let’s eavesdrop on the brainstorming session that led to Cliché:

“French would be good.”

“Oh yeah. They have those cool accent marks, don’t they?”

“Like exactly what you’d expect in a casino that’s in Nevada, but not in Vegas.”

“Where everybody knows your name.”

“And everything looks just like everyone’s idea of a Nevada casino.”

If you prefer your clichés to include flashing lights and unclad young women, Harrah’s has a weirdly named attraction for you, too. Behold the VEX Nightclub. 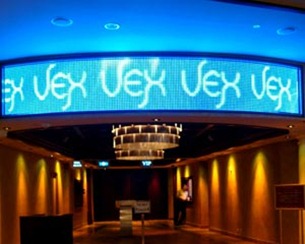 Does nobody over there own a dictionary?

According to a case study on the Philips Color Kinetics website, the club’s design involved “the latest in LED lighting technology,” especially on “the club’s signature Go-Go dancer catwalks.” The LED sources are controlled by something called a Video System Engine and a DMX system, so maybe—I’m trying to be generous—VEX is some sort of abbreviated acronym.

Or maybe the dancers just pout a lot.

Hat tip to my knowledgeable friend Vicky for telling me about Cliché.

Posted at 06:56 AM in Cliches, Hospitality, Naming, Spelling, That Word, They Said WHAT??? | Permalink

And of course, the VEX logo maker crafted a V that looks a whole lot like an S.

I was kind of hoping that what you would include was a snippet of imagined conversation by the patrons of a bar called Cliche..."Do you come here often?" "What's your sign?" etc.