Word of the Week: Recomposure Zone

Recomposure zone: The name given to the 6,000-square-foot area just past the security checkpoint in San Francisco Airport’s new T2 (Terminal 2), scheduled to open in the spring. T2 represents a complete renovation of the airport’s 56-year-old Central Terminal, which for the last 10 years has housed administrative offices and the airport’s medical clinic. The renovated terminal will serve as a hub for Virgin America and American Airlines. 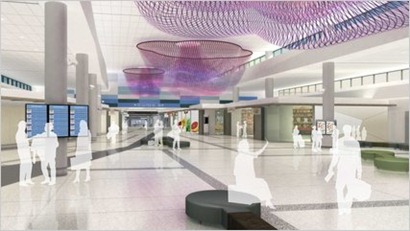 A rendering of the recomposure zone by project architect Gensler. (New York Times)

The new terminal represents the first major airport construction undertaken since 9/11, which dramatically changed the air-travel experience. Before 9/11, writes design and architecture columnist Allison Arieff in the New York Times’s Opinionator blog, it was typical to arrive 30 minutes before your flight was due to depart.

Today, as Bill Hooper, aviation practice leader at Gensler, says (and we all know all too well), “We all need at least twice that to make sure we get through security in time. Plus, you need to grab food in the terminal, because meals aren’t served on flights as they once were. So we have people spending twice as much time past security, and needing more amenities while they’re there. The things that travelers need in terminals today just weren’t considerations when most terminals were originally designed, so the needs just aren’t being met.”

The recomposure zone is one way in which the new terminal will attempt to meet those needs. According to the SFO website, the zone “will offer comfortable benches, plants, and water features inspired by Zen gardens” while giving travelers a comfortable space in which to replace shoes, collect themselves, and reconnect with traveling companions.”

The recomposure zone is a more elaborate (and self-serious) version of a feature Milwaukee’s Mitchell Airport has had for more than two years: the recombobulation area*. “Recombobulation area” was named Most Creative Word of the Year for 2008 by the American Dialect Society; read about it in my January 2009 summary.

* “Recombobulation” is a play on “discombobulation,” which Etymology Online tells us dates back to 1834 (“Amer.Eng., fanciful coinage of a type popular then [originally discombobricate]”). “To discombobulate” is to throw into a state of confusion; so “to recombobulate” would mean “to restore order.” Presumably, “recomposure” is a restoration of composure rather than a reversal of decomposition.

Forget the airport -- I need a recomposure zone in my house.