« Word of the Week: Accord | Main | Snowclones Happen »

Americano Restaurant is a classy joint* in the Hotel Vitale, at the corner of Mission Street and The Embarcadero in San Francisco. It’s a place where customers are expected to know their confit, their brodo, their salumi, and their Grana Padano. Some of them may also know the correct definition of “arriviste.” However, the Americano’s managers apparently do not. 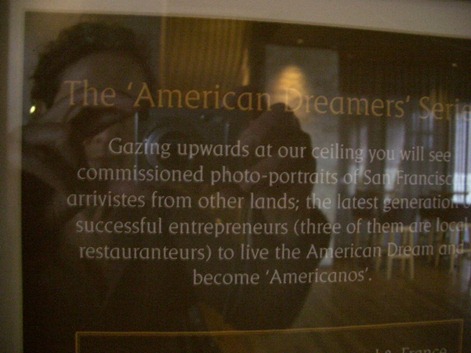 I took the best photograph I could of this sign, which is etched in glossy granite and mounted on a wall at the entrance to the restaurant. Here’s the text:

Gazing upwards at our ceiling you will see commissioned photo-portraits of San Franciscan arrivistes from other lands; the latest generation of successful entrepreneurs (three of them are local restauranteurs) to live the American Dream and become ‘Americanos’.

The primary goof: “Arriviste”—from the French arriver, to arrive—does not mean what they think it means. It does not mean “arrival” or “newcomer”; rather, for more than a century it has meant “a pushy, ambitious person” or “an upstart,” someone intent on “arriving” in society. It has no positive connotations.

And as long as I’m being picky:

I’ve had only a light snack at Americano, so I can’t say whether the restaurant pays closer attention to cuisine than to editing. At least one critic, Amy Sherman, gave the restaurant a favorable review.

Hat tip for the headline: The Princess Bride.

Read other posts in the That Word series.

Posted at 06:21 AM in Punctuation, Restaurants, Spelling, That Word, They Said WHAT??? | Permalink

Incidentally, Italian "arrivista" has the same negative connotations as the English word, so it's not even a matter of false friends by non-native speakers...

I love your blog and I find your views both clever and entertaining. However, I was surprised to see that you adhere to the "old school" custom of putting the punctuation inside the quotation marks with no exception. The way they wrote it, "become 'Americanos'." is fine with me. Here is how I see the difference:

Thank you for your witty and word(l)y blog!

Mima: “When it comes to commas and periods … logic doesn't enter into the equation, at least not in the United States. Universal American usage places commas and periods inside the quotation marks, regardless of logic.”
Source: http://grammartips.homestead.com/inside.html

If the photos included those responsible for the sign, then perhaps 'arrivistes' is le mot juste.