Over the last 12 months—and, let’s face it, even longer—I’ve taken many corporate and product names to task. In the waning hours of 2010 I’d like to balance the books and hand out some awards for Excellence in Naming.

In alphabetical order, here are ten (plus one) very nice names.

AndFriends: The “and” comes from “Android”—this is an Android app that makes search social “through leveraging your network of Android-using friends,” as TechCrunch puts it. But the “and” also means “plus” and “with,” which are appropriate associations. Many Android apps use the “andro-” prefix; it’s refreshing to see a different approach (from a Japanese company, interestingly).

Baacode: Icebreaker, which makes clothing from New Zealand merino wool, wants customers to “see the living conditions of the high country sheep that produced the merino fibre in your Icebreaker garment, meet the farmers who are custodians of this astonishing landscape, and follow every step of the supply chain.” A unique “Baacode” in each garment allows the customer to trace the garment through the entire supply chain. Smart marketing—and a clever, appropriate pun on “barcode.”

So there’s that meaning, which hinges on a vowel switch that leaves the pronunciation intact. But wait, there’s more:

We, like most people, enjoy saving money and would often collect the paper and plastic loyalty club cards from our neighborhood merchants.  However, we often became frustrated by the limitations of these physical cards, namely carrying, organizing and trying to remember all of them.  Losing a card was even worse because all of the points and the status that we had accumulated (not to mention the money we had spent) went down the drain.  We found ourselves routinely asking, “Where’s that card again?” or “Can I get one of those cards again?”  “Card again” soon became the inspiration for our name: Cardagin.

Four & Twenty Blackbirds: At least one influential restaurant consultant says pies will be the top restaurant trend of 2011. I say hurrah: I’m thoroughly sick of Chocolate Decadence and—spare me!—desserts based on snickerdoodles. I also say hurrah to Brooklyn pie shop Four & Twenty Blackbirds, whose name got me humming a song (of sixpence). I also like the shop’s playful tagline: “Keep your fork—there’s pie!” And so what if the owners couldn’t get the literal URL? They found a smart and quirky solution: birdsblack.com. (There’s another Four and Twenty Blackbirds, in Lawrence, Kansas. Oddly, though, it doesn’t sell pie.)

Genevieve and Junípero: Anchor Brewing has been making beer in San Francisco since 1896; it opened a distillery in 1993 to make limited editions of gin and whiskey. Genevieve is Anchor’s re-creation of the earliest Dutch gins, known as “genever”—a name that came from the juniper berries used to flavor the spirits. The Dutch name for juniper is jeneverbes, which in turn came from the French genievre. Genevieve, a woman’s name of French and Welsh origins, is not related to genievre; some references say it means “white wave” or “white plume.” Nevertheless, it’s a perfectly evocative name—European, slightly old-fashioned, suggestive of “juniper”—for the Anchor product. 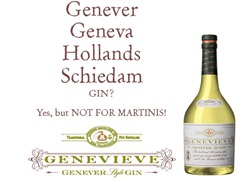 And so is Junípero (hoo-NIP-air-oh). Not only is the name directly connected to “juniper,” but it also has strong regional associations. As every California schoolchild used to know, Father Junípero Serra was the founder of the California missions; many schools and parks bear his name, as does a major San Francisco thoroughfare, Junipero Serra Boulevard (no accent—and it’s always referred to by its full name). Again: an old-world personal name that’s right on target for the category. Splendid naming on both counts, Anchor!

Inkling: This Bay Area startup delivers textbook content to iPads and other tablet devices and allows students to share their notes and comments. I confess I’ve tried for years to name a company “Inkling”—it’s a wonderful old word (possibly from Middle English inclen, “to utter in an undertone,” or ningkiling, a hint or suggestion)—that means “a slight understanding” or “a notion.” I’m delighted to see the name used so effectively. The etymology has nothing to do with ink, but the association doesn’t hurt in this context. And the –ling suffix, which can mean “one associated with something” (e.g., nestling) or serve as a diminutive suffix (e.g., duckling), suggests the tablet computer as compact accessory. Bonus points for a well-written and -edited website and for a simple, beautiful logo:

Joan of Arctic. Regular readers know I can be pretty tough on oddly named shoes. So I’m especially pleased to share this name, which aptly and wittily denotes Sorel’s cold-weather performance boot for women. Not only does “Arctic” build seamlessly on “Arc,” but the image of that medieval bonfire conjures up toasty warmth. (On the other hand, or foot, Helen of Tundra, also from Sorel, is a less-successful pun. I’d have gone with Helen of Troika.)

Plumen: This “designer energy-saving light bulb” deconstructs the compact fluorescent light and turns it into a work of art. The name—plume blended with lumen—perfectly captures the elegance of the product. 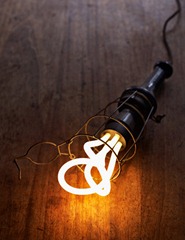 Available only in Europe and the UK so far, but the website says “US & rest of the world coming soon.” (Via Better Living through Design.)

Punchdown: This new “natural wine bar” in Uptown Oakland (my fair city) took over a spot previously occupied by the boringly named Franklin Wine Bar. By contrast, Punchdown is anything but dull. It takes its name from a step in the winemaking process that’s probably unfamiliar to much of the drinking public. As the grapes ferment, carbon dioxide causes the solids to float to the top of the barrel; they must be punched down into the juice. (I’ve performed this task; it takes a lot of muscle.) I like the energy and unpretentiousness of “Punchdown” and the slight mystery around the word (despite its easy pronunciation). And I love the idea of saying “Let’s go down to Punchdown in Uptown.”

Sir Richard’s Condoms. Please don’t make me explain why this name is so damn funny (and apt). I’ll say only that the company, based in Colorado, has a serious sense of purpose (“we believe safe sex is a basic human right” and “buying a condom should be cool instead of embarrassing”) and a very nice tagline: “Doing Good Never Felt Better.”

Here’s to many more nicely named companies and products in 2011!

Superb! I love using language like this. Now I've got to check out your disliked ones, if I can find them. I have so many that I've lost count!

Saskia: The link in the first sentence will take you to all my "bad names" critiques. Or just go to http://nancyfriedman.typepad.com/away_with_words/bad-names/

Though I appreciate the wordplay in 'plumen', it still sounds dirty.

"Baacode" is about as wonderful a term as I've heard lately.

Great names, great list. I wonder about the challenges of localizing them, though. Some seem a little U.S.-centric, limiting their brand reach.