Word of the Week: Nurdle

Nurdle: A toothbrush-length squirt of toothpaste. The word, of unknown origin but possibly related to nodule, was reportedly coined by the American Dental Association in the 1990s to educate the public about proper brushing technique. The word is spelled “nerdle” in an August 19, 1996, St. Louis Post-Dispatch article quoted in Double-Tongued Dictionary, but the spelling has since been standardized as “nurdle.” (For other definitions of nurdle, scroll down.)

Nurdles have been in the news recently thanks to a trademark-infringement lawsuit filed in late July by GlaxoSmithKline, makers of Aquafresh “Triple Protection” toothpaste, against Procter & Gamble, which owns the Colgate “Triple Action” brand. At stake are both the nurdle images and the “triple” descriptors. 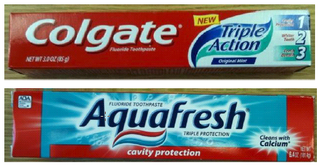 Writing last week in Duets Blog, whose beat is the intersection of marketing and trademark law, lawyer Dan Kelly summarized:

Each party has some good arguments. GSK has trademark registrations on TRIPLE PROTECTION and a red, white, and blue nurdle. Colgate argues that TRIPLE PROTECTION is weak and that a nurdle is descriptive because it shows the product. The critical question:  on seeing the nurdle and TRIPLE ACTION description on packages of Colgate product, would consumers be confused into thinking that the toothpaste in the Colgate package was sourced, sponsored, or endorsed by the makers of Aquafresh? Certainly not after this suit.

Nurdle is also used in the plastics industry to describe pea-size plastic resin pellets. When released from inland factories, the pellets often make their way into coastal waterways and even the deeper oceans, where they pose an ongoing threat to marine animals that mistake the pellets for food. According to a 2001 study of Orange County (California) beaches, nurdles made up 98 percent of ocean debris. See, for example, this 2007 article about the Great Pacific Garbage Patch. 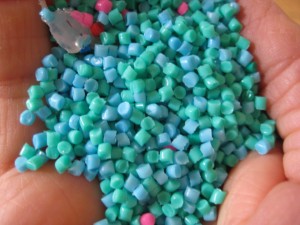 This “nurdle” usage apparently is a variation of “nodule” (literally, a small node or knot). It began appearing in print around 1997; here, for example, is San Francisco Chronicle columnist Leah Garchik on September 22, 1997:

Garchik’s readers rose to the occasion, and the following week she printed several of their responses, most of them facetious.

(One of my former clients, a catalog/online retailer, used to refer to the white versions of these plastic packaging pellets as “ghost poop.”)

One additional definition for the noun form: nurdle may mean a thing of unknown name; a doodad or thingamajig.

Nurdle is also a verb used in cricket. In fact, the only definition provided by the online Oxford English Dictionary is this one:

trans. To work (the ball) away gently, esp. to the leg side; to accumulate runs slowly by this method. Freq. in nudge and nurdle. Also to nurdle one’s way and intr.

The earliest citation, from the Times, is from 1985: “He crept, nudged and nurdled his way towards the total.”

To gently waffle or muse on a subject which one clearly knows little about.

Posted at 06:04 AM in Branding, Packaging, Sports, Trademark, Word of the Week | Permalink

Some words are just cute. Like nurdle or sniggle.

I have to thank you for the vocabulary builder here. I have some new baby rabbits and decided to call one Nurdle-Bun. The rabbits always have "bun" in their name. ie, Bungee, Buck Bunny, Bunschen, Bundle, Currant-Bun (it's spotted!).