Word of the Week: Cherpumple 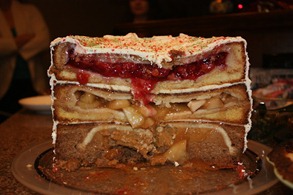 Photo: This Is Why You’re Fat (“Where dreams become heart attacks”).

Cherpumple was invented and named last Thanksgiving by Charles Phoenix, a 47-year-old Los Angeles resident whose website describes him as a “showman, author, humorist” and “ambassador of Americana.” A page devoted to cherpumple describes the creation as the “desert [sic] version of the Turducken”—if you need a definition of the latter, go here—and goes on to explain:

The inspiration for the Cherpumple came from the typical desert [sic] table selection you would find at one of my family’s holiday celebrations. Seems there’s always cherry, pumpkin, and apple pie and a cake that’s a family tradition. It has a layer of spice and a layer of yellow. Since I always want to have a piece of each of the pies and the cake I figured why not make that waaaaaaaay more convenient. So I baked them all together as one and the Cherpumple was born.

There’s a recipe (using frozen and boxed ingredients) and a video on the site, along with suggestions for making a flambé version. As Mr. Phoenix told the Wall Street Journal earlier this month, the recipe “puts the kitsch in kitchen.” The entire enterprise can take up to three days, the WSJ reports, “because each component must cool before being baked into another.”

According to the WSJ, other bakers have viewed Mr. Phoenix’s achievement as a challenge. Their variations have included cherberryple (which replaces the pumpkin layer with blueberry pie) and pumpple cake (pumpkin and apple), “which has 1,800 calories in an $8 slice designed to serve four.”

In related culinary portmanteau news (from the archives): Turbaconducken.

Posted at 06:32 AM in Food and Drink, Holidays, Portmanteaus, Word of the Week | Permalink

No one ever went broke underestimating the culinary taste of the American pie-eater.

Most pies are messy to cut and eat.This triple layer thing looks impossible to serve without turning it into mush. Hmm... Not a bad idea!