It sorta-kinda means what they think it means. And yet . . . 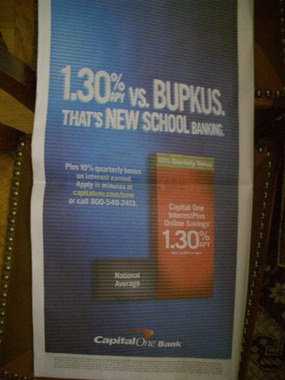 Yes, it’s our good friends at CapitalOne with a new print ad in the “New School Banking” campaign I wrote about last month. In the BART station ads (which are still up), CapOne mocked customers for banking “like an Egyptian” or “like a Pilgrim.” Now we’re presumably being told not to bank like our beloved bubbe and zayde.

I refer, of course, to that word bupkus, which can also be transliterated as bupkes, bobkes, bobkis, or any of several other spellings. It’s a Yiddish word (originally from Russian), that Leo Rosten, in The Joys of Yiddish, carefully tells us means “something trivial, worthless, insultingly disproportional to expectations.” In the ad, bupkus is used as a synonym for “nothing.” Rosten translates it as “beans,” adding that these beans are not the kind you put in the soup pot.

No, they certainly aren’t. The Joys of Yiddish was published in 1968; nearly 40 years later, Michael Wex provided an unbowdlerized definition of the word (which he spells bupkes) in Born to Kvetch: Yiddish Language and Culture in All of Its Moods:

Bupkes means “nothing,” all right, but it’s a rather specific kind of nothing, as different from gornisht, the dictionary Yiddish for “nothing,” as “nothing” itself is from “sweet fuck-all.” The basic meaning of bupkes . . . is dung, specifically the dung of sheep  or goats. Like the English “bullshit” or “horseshit,” bupkes was once fairly widespread as an expression of disbelief. A response of bupkes meant that you thought someone was talking nonsense; whatever he was saying, it was crap. . . .

Like much of the Yiddish that has found its way into English, bupkes has been downgraded from vulgar to cute; but unless you were discussing barnyard waste, you’d try to avoid the word in polite Yiddish conversation.

It’s not as though bupkes hasn’t already surfaced in polite American conversation. Back in 1965, there was an episode of The Dick Van Dyke show titled “Bupkis”; it centered on a song (also titled “Bupkis”) that Rob (Van Dyke) and his buddy had written during their army days.* Bupkes—along with a lot of other Yiddish words—has also been uttered on The Simpsons (notably by Krusty the Clown, the son of a rabbi).

And Yiddish has cropped up in a few ads, too: See my April 2010 on spritz as it’s used in ads for Poise pads (for “light bladder leakage”).

But as far as I can tell, this is a breakthrough (you should pardon the expression) for financial-services advertising. I’m not sure, though, whether it’s cause for kvelling or kvetching.

For more on Yiddishisms in the American vernacular, see Mark Peters’s “Yiddish, Schmiddish!”, “an ode to the wonderful ‘schm’  sound,” in GOOD magazine.

Elsewhere in the That Word files: unrequited and sophistry.

* In his chapter on bupkes and other Yiddish barnyard slang, Michael Wex quotes a line from the song: “Bupkis means a lot of nothing, and that’s what you’ll get from me. Bupkis!”

Posted at 05:37 AM in Advertising, Banking, That Word, Yiddish | Permalink