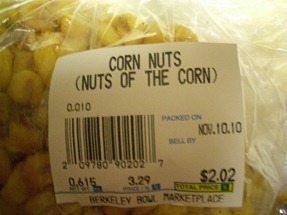 Perhaps I can interest you in some balls of the fish to go with those nuts of the corn.

Corn “nuts” are not, of course, nuts; they’re kernels. As for “nuts of the corn,” that’s just Too Much Explanation.

These particular corn nuts represent a semi-genericized trademark. The CornNuts mark, spelled as one camel-case word, was registered to Albert F. Holloway in 1951; Holloway had created the product back in 1936, named it Brown Jug Toasted Corn, and sold it to tavern owners who gave it away to customers in whom the salty snack induced a profitable thirst.*

Corn nuts aren’t particularly hard to make: First you soak whole corn kernels in water for three days to rehydrate them, then you deep-fry and salt them. The secret of Holloway’s CornNuts lay in the corn itself. He had started his business using sweet corn and then discovered Cuzco corn, a Peruvian variety with jumbo kernels. As big as an inch across, these kernels resembled actual nuts, inspiring Holloway to change his company’s name. Eventually, his scientists developed a Cuzco hybrid that could be grown in California. The supersized CornNuts were introduced in 1964; Planters—the nut-nut (as opposed to corn-nut) company—bought the company in the 1990s. After a 2000 merger, Planters and CornNuts became a subsidiary of Kraft Foods.

Read about the Legendary Giant Corn and the Lost Tribe of Stun Nroc, whose members are reportedly known “for their high tolerance for spandex and edgy approach to facial grooming.”

Listen to the infamous CornNuts “Bust a Nut” radio commercial from the 1990s. (“Go to your room and lock the door/’Cause when you try it once you’ll wanna try it some more.”)

* Curiously, neither Holloway nor any of his corporate heirs seems to have troubled to register the two-word “Corn Nuts” spelling with the USPTO.

Posted at 06:43 AM in Advertising, Food and Drink, They Said WHAT???, Trademark | Permalink

You have reminded me of the joke: What's the difference between beer nuts and deer nuts? Beer nuts are $3, deer nuts are under a buck.

I was all, like, going to comment that CornNuts is not camel-cased, it's Pascal-cased, but then I went and looked at the Wikipedia article and noted that they're wishy-washy about the distinction. But I'll comment anyway. :-)

In my work, the distinction is both clear (camel casing = lowercase initial letter, Pascal casing = first letter uppercase) and has specific provenance. Per the non-binding rules of the programming framework I work with (.NET), the rules are that:

In the initial version of our guidelines, the rules were so stringent that it resulted in certain, er, illogicalisms. For example, if the term "ID" were a component of a member name, per the rules it might appear as CustomerId. This looked ... odd ... to a lot of people, so the rules were amended to allow two-letter acronyms like this to be uppercased per their usual English spellings, hence CustomerID. But longer acronyms/initialisms still follow the rules, and we end up with a property name like BaseUrl (to editors, this should be BaseURL).

Little to do with CornNuts, I realize. Which, I must say, I really like, though I haven't had any in a long time. I always thought they were just deep-fried hominy.

I wonder if the bulk-foods aisle has more than its share of guffaws?