Word of the Week: Range Anxiety

Range anxiety: “The fear of being stranded in an electric car because of insufficient battery performance – said to be a barrier to sales of electric vehicles.” (Schott’s Vocab, January 15, 2009.)

Reporter Andrea Kissack looked into the electric-car industry in a three-part series that aired on NPR earlier this month. She introduced one segment this way:

Every year, buzzwords enter the American lexicon, like “octomom” or “crowdsourcing.” Next year, “range anxiety” may top the list. It’s the fear of being stranded in an electric car because the battery has run out.

Range anxiety has been in the headlines recently because of the imminent introduction of three all-electric cars, the Nissan Leaf, the Chevy Volt, and the Coda. But the term predates those models by more than a decade, first appearing in connection with the EV1, the electric car manufactured by General Motors between 1996 and 1999. (See the documentary Who Killed the Electric Car?) According to Word Spy, “the word lover’s guide to new words,” the earliest citation for range anxiety was in a September 1, 1997, article published in the San Diego Business Journal.

On August 31, 2010, the automotive blog Jalopnik broke the story that GM had filed a U.S. trademark application for range anxiety:

The application filed with the U.S. trademark office in July suggests GM wants every marketing weapon it can find when it finally starts selling the Jesus Car Chevrolet Volt — GM's Extended Range Electric Vehicle (EREV), basically a plug-in electric with a gas engine to charge the battery when needed — in a couple of months. That includes range anxiety — a fear of driving too far from your power plug. 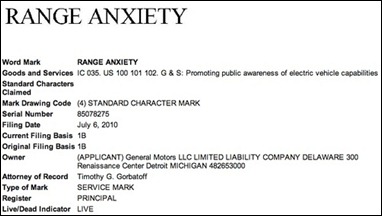 Responding to the trademark news, a spokeswoman for Tesla, the Silicon Valley manufacturer of the $109,000 all-electric Roadster, told the Wall Street Journal:

“By all means, GM can have ‘range anxiety’ . . . To Roadster owners, the term is as irrelevant as ‘gas stop’ or ‘smog check.’ We are, however, looking into trademarking ‘Tesla grin.’”

In other electrifying trademark news, Nissan has filed for protection of the phrase “the new car.”

Posted at 06:17 AM in Cars and Motorcycles, Trademark, Word of the Week | Permalink

"The new car"? Is Nissan on crack?