Word of the Week: Consist

Consist (noun): “A lineup or sequence of railroad carriages or cars, with or without a locomotive, that form a unit.” (Source: Wiktionary.) The emphasis is on the first syllable: 'kän-sist.

Until last week, when I took the Coast Starlight up to Portland, I’d never encountered the nominative form of consist. But there it was, toward the back of the “Welcome Aboard” brochure. 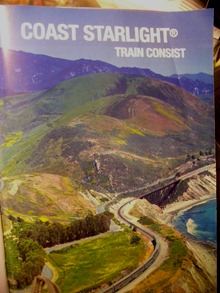 That page opens up into a gatefold that depicts linear and overhead views of the cars. For the readers among us, there’s a page of descriptive text. 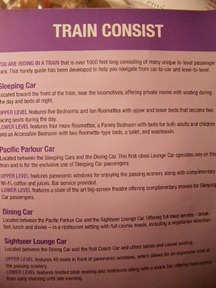 It wasn’t that I didn’t get the gist of train consist, but I was puzzled at the casual usage of what seemed to be specialized anthimeric jargon. And I was even more puzzled, after I returned home, not to find it in any of the usual reliable sources: the Oxford English Dictionary, the American Heritage Dictionary, Collins English Dictionary. I finally found it in Merriam-Webster online, which gives this definition for consist (noun):

makeup or composition (as of coal sizes or a railroad train) by classes, types, or grades and arrangement

The first known use of this sense of consist, says Merriam, was in 1898, at the height of the railroad era. But M-W declines to provide the citation.

Train consist is also familiar to model-railroad hobbyists. This dictionary of model-railroad terms defines consist as “the list and/or order in which multiple engines or train cars are lined up.” That glossary yields some other interesting terms, such as homosote—“pressed paperboard often used as a subbroadbed”—and givens and druthers, “A phrase originated by the late John Allen relating to how a model railroader should balance the list of things that can't be changed (like room size, budget, etc.) with the wants and desires of what s/he would like to be included in the railroad during the layout planning process.”

And is it possible that nominative consist has jumped the tracks? When I tweeted about train consist, I received this reply:

In a follow-up tweet, Drew clarified that the pronunciation he’d heard was “KON-sist” (with the same first-syllable emphasis as in “train consist”). He added: “I had never heard it before and assumed it was businesspeople jargon.”

Here’s something else I learned on my 18-hour rail journey: Wi-Fi is a registered trademark. 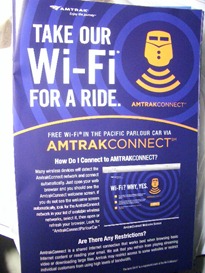 You can just barely make out the TM symbol in the headline. The tiny type at the bottom of the page says, “The term Wi-Fi® is a registered mark of the Wi-Fi Alliance®.”

The trademark registration for “Wi-Fi” was filed back in 1999, which really surprised me. I do believe, however, that the Amtrak brochure represented the first and only time I’ve seen full trademark props given to what’s become a genericized term. (Read more about the Wi-Fi Alliance here.)

I did test the Coast Starlight’s Wi-Fi, and it worked pretty well, but it was thoroughly trumped by the rest of the train experience. We curled at least three times around Mount Shasta, which was blanketed in snow (yes, in October). My fellow passengers included some genuine trainiacs with impressive tales of journeys domestic and exotic. The pace was ideal for daydreaming, and I didn’t even mind the minor delays. And here’s how perfect the Coast Starlight name is: when I awoke just before dawn and parted the curtains of my roomette, I saw the blazing Orion constellation framed in my window.

I’ll report on some of my Portland brand/language sightings later this week.

Posted at 06:42 AM in Jargon, Naming, Technology, Trademark, Transportation, Travel, Usage, Word of the Week | Permalink

Nancy- In addition to the star gazing, it sounds like your trip was idiomatically successful as well!

As always, I am enjoying your blog.
-Mary

Thank you, Nancy. I've never heard of this "consist," but now I will be prepared when I hear it at a business meeting. I tend to make gasping and choking noises at business meetings, so this should help me control that reaction. To your second point, you must have been distracted in April when I mentioned Wi-Fi: http://twitter.com/#!/EditorMark/statuses/11941549399

Most edified, Nancy. I adore train travel. The night train from Montreal to NYC is one more pleasure I recommend.

Hi Nancy, My 1st visit here via twitter. I'm so glad u came to PDX & sounds as though your trip was enjoyable. I must take the train sometime as it is how I 1st arrived to Portland when I was 4 yrs old. That was a mere 44 yrs ago. Time has flown.
Blessings, Lisa
LeafandInk

Hello Nancy - I came here via your tweet on this topic. I started at Amtrak in '95, and learned this usage of consist then. I dealt with it in written form, so when I spoke the word in a meeting with the accent on the second syllable, there was an awkward silence in the room until I was gently corrected. I found your 1898 citation of interest, as my colleagues and I would have all guessed it was a term from the oldest days of railroading.

Glad you enjoyed your trip.

Wi-fi® is a registered mark, but did you know that Quiet Car® is too? Amtrak owns that one...

Wow, excellent find -- never heard this one before.

re: Wi-Fi -- this question came up among the editors at work just recently. More than one of us were (was, haha) surprised to hear that it's a trademark. Whether the trademark is enforceable at this point is a different question, tho; I haven't heard any evidence that the owner has been diligent about trying to corral its spread into the vernacular as a common noun.