Capital One Bank has taken over the Montgomery St. BART station with its campaign for “new-school” banking, which involves some infinitesimal interest rate paid on savings accounts. I almost missed my train while I pondered a couple of the ads. For the life of me, I couldn’t remember (or imagine) how Babylonians did their banking. Did the Code of Hammurabi cover direct deposits? Did the whole system collapse under the weight of all those gold shekels? And how do Iraqis—modern-day Babylonians, more or less—feel about this slur against their ancient homeland?

(On Twitter, Trochee—linguist Jeremy Kahn—suggested that the ad made sense “because cuneiform banking is so 1500 B.C.” And Chrys—another linguist—wrote, “Maybe they want you to walk like an Egyptian?” Hmm. I’ve always liked that song.)

Then there was this: 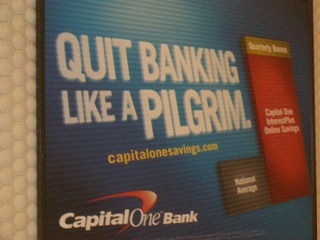 Stumped again! Is Capital One dissing the First Thanksgiving Pilgrims, with their white collars and buckled shoes and muskets? Did they even have banks? (Trochee again: “The Pilgrims were notorious for their proscription of usury. No wonder C1 doesn’t like them.”)

But maybe Capital One was thinking of different pilgrims—from the Canterbury Tales, perhaps? The Summoner’s Tale had something to do with charitable gifts, if memory serves. No? Then how about pilgrims to Mecca? Nope: Islam prohibits interest on loans. Well then, do you suppose CapOne is gunning for Pilgrim Bank?

In the TV version of the “pilgrim” ad, actor Jerry Stiller (who played George Costanza’s father on Seinfeld) harangues a crowd. I couldn’t find this ad online, but I did find older Capital One TV spots featuring Visigoths and Vikings. What any of these folks have to do with Capital One’s tagline—“What’s in Your Wallet?”—is a mystery to me.

So I’m still clueless. And I have another question: Just how do you write a capital one, anyway?

maybe it's the "ancient" thing. this is the "new" way.

even so, it would make more sense if they were focusing on electronic banking and all them newfangled machines the kids like.

As far as my keyboard is concerned, a capital one is an exclamation point.