« Does This Name Make Me Look Fat? | Main | Word of the Week: Nevertiree »

The World in Other Languages 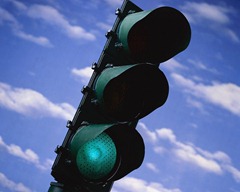 A couple of views from my bookshelf:

Japanese used to have a color word, ao, that spanned both green and blue. In the modern language, however, ao has come to be restricted mostly to blue shades, and green is usually expressed by the word midori (although even today ao can still refer to the green of freshness or unripeness—green apples, for instance, are called ao ringo). when the first traffic lights were imported from the United States and installed in Japan in the 1930s, they were just as green as anywhere else. Nevertheless, in common parlance the go light was dubbed ao shingoo, perhaps because the three primary colors on Japanese artists’ palettes are traditionally aka (red), kiiro (yellow), and ao. The label ao for a green light did not appear so out of the ordinary at first, because of the remaining associations of the word ao with greenness. But over time, the discrepancy between the green color and the dominant meaning of the word ao began to feel jarring. Nations with a weaker spine might have opted for the feeble solution of simply changing the official name of the go light to midori. Not so the Japanese. Rather than alter the name to fit reality, the Japanese government decreed in 1973 that reality should be altered to fit the name: henceforth, go lights would be a color that corresponded to the dominant meaning of ao. Alas, it was impossible to change to color to real blue, because Japan is party to an international convention that ensures road signs have a measure of uniformity around the globe. The solution was thus to make the ao light as bluish as possible while still being officially green.

--From Through the Looking Glass: Why the World Looks Different in Other Languages, by Guy Deutscher (Metropolitan Books, 2010).*

Persian, Dilorom told me, had only one word for crying, whereas Old Uzbek had one hundred. Old Uzbek had words for wanting to cry and not being able to, for being caused to sob by something, for loudly crying like thunder in the clouds, for crying in gasps, for weeping inwardly or secretly, for crying ceaselessly in a high voice, for crying in hiccups, and for crying while uttering the sound hay hay. Old Uzbek had special verbs for being unable to sleep, for speaking while feeding animals for being a hypocrite, for gazing imploringly into a lover’s face, for dispersing a crowd.

It was all just like a Borges story—except that Borges stories are always so short, whereas life in Samarkand kept dragging obscurely on and on.

--From The Possessed: Adventures with Russian Books and the People Who Read Them, by Elif Batuman (Farrar, Straus and Giroux, 2010).**

Note: I received a review copy of Through the Looking Glass from the publisher. I found The Possessed in the Oakland Public Library.

* I haven’t yet finished reading Through the Looking Glass, but I’ve been paying attention to the response to the book among linguists. Here, for example, is The Lousy Linguist’s critique (in a nutshell: “too light weight for me”); and here is Derek Bickerton in the New York Times Sunday Book Review (summary: Deutscher’s writing is “chatty and accessible” … but “he burdens his findings with more theoretical weight than they can bear”).

** I thoroughly enjoyed this collection of linked essays. Not only is Batuman an engaging and literate writer, but the back-cover description is very amusing: “If you’re going to read just one book about conference planning, Isaac Babel, Leo Tostoy, boys’ leg contests, giant apes, Uzbek poetry, the life of the mind, and resignation of the soul—seek no farther: THIS IS THE BOOK FOR YOU!!!” Also, the cover illustration was done by the peerless Roz Chast.