Among English speakers, there seems to be an irresistible, universal urge to coin words through blending word parts—to create what Lewis Carroll called portmanteau words. (Chortle, frabjous, and galumph are a few of Carroll’s famous portmanteaus.) But popular as they are, portmanteaus fail much more frequently than they succeed. In his book Predicting New Words, Allan Metcalf—the executive director of the American Dialect Society—estimates that only 5 percent of successful new words are blends. For every winner like brunch or smog there are countless losers like linner (coined from lunch plus dinner) and plerk (play plus work).

Those daunting odds don’t seem to be much of a deterrent, though, especially among novice name developers. Perhaps that’s because effective portmanteaus pack such a wallop. Consider Freakonomics, Edutopia, or Gymini. Each name clearly communicates two meanings while being easy to pronounce and fun to say.

Beware, though: hitting the target requires a practiced ear and semantic savvy. Without those abilities, you’re likely to miss by a mile—as do these less-than-effective portmanteau names that I’ve noticed recently. 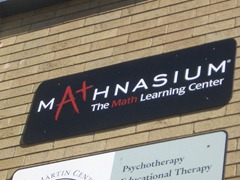 “A gymnasium develops the body—Mathnasium develops the mind,” explains the web copy for this chain of after-school learning centers. Unfortunately, the name is less than the sum of its parts. We abbreviate gymnasium to gym, not nasium; separated from the rest of the word, –nasium suggests “nasal” or “nasturtium,” not “workout.” The logo isn’t helping here: the red “A+” stands out as a symbol of excellence, but it also draws attention to “hnasium,” which is just puzzling.

It’s not that we don’t get the meaning of this name: it’s obviously formed from kid and philanthropy. But the Greek roots of philanthropy are phil- (loving) and -anthropos (humanity); -lanthropy makes no sense, and kid bumps up against it awkwardly.

When tweaking a foreign import such as philanthropy, you need to make the new word as seamless and fluent as possible: Freakonomics works because it maintains the sound as well as the meaning of “economics.” In this case, you might be able to get away with a coinage like fuelanthropy (subsidized heating oil?), which is just a vowel sound away from the original word, but caution is required.

Besides, here’s a concept—introducing children to the virtues of generosity—that begs for a playful, upbeat name that’s metaphoric rather than literal, and straightforward rather than multisyllabic and abstract.

This organization’s problems may go beyond a weak name. The logo is cute and colorful, but conveys nothing about charity or the spirit of giving. Nothing’s been posted on the Kidlanthropy blog for almost a year, and the organization’s Twitter account is infrequently updated with poorly spelled, poorly punctuated messages.

Another shotgun marriage of word parts: the first syllable of euphoria sounds nothing like nail, so the resulting blend is clunky and inelegant—just the opposite of what a day spa’s image ought to be. (It isn’t even accurate: this establishment offers skin care and massage as well as manicures and pedicures.) The hodgepodge approach extends to the website design and typography. Oh, and here’s a free content tip: when you tell your Worldwide Web visitors that you’re located in “Downtown,” it’s a good idea to let them know which city you’re talking about.

Nailphoria evokes phantasmagoria and anaphora to me. Do you suppose that's what the salon was going for?

My first impression of "Kidlanthropy" is an association with "lycanthropy," reinforced by the photo of a child attacking with bloodstained hands.

Nancy, what is the term for elisions like "blog"? Thanks!

Duchesse: "Blog" is a truncation of the compound word "weblog." (Weblog isn't a portmanteau because it maintains both component words intact: web and log.) "Blog" first appeared as a joking aside in a 1999 post on Peterme.com; the author, Peter Merholz, broke "weblog" into a phrase, "we blog."

Maybe it's because I use my teeth to manicure my nails, but Nailphoria just made me think of iron nails - the kind you pound with a hammer.
The oh so obvious spa portmanteau is Youphoria, there is such a day spa in Texas.
The Kidlantropy website is an excercise in self congratulation - my first impression was that it was a scam.
Another educational post. Thanks!

Your site is so entertaining!

I once passed by a shop called TanFastic, combining tan + fast and perhaps fantastic, but my first (nonsensical) thought was tan girls fasting, manically.

I like my own portmanteau coinage circa my daughters' respective infancies: drooble. As in, it's dribble AND drool. Not quite chortle, but I still try to use it where I can.

Meanwhile, your three examples are just mind-numbingly labored and boring.

Myth and legend are also a bit tautologous. But much more alarming is the right-wing conspiracy to make “refudiate” an actual word?
http://twitter.com/Write_Well_